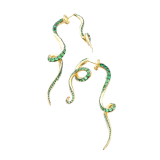 Lots by Emmanuel Tarpin at Sotheby's 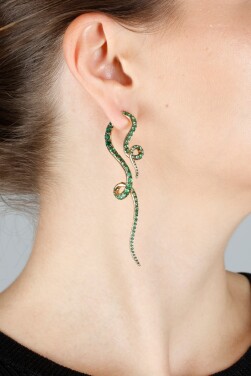 Designer Emmanuel Tarpin arrived on the international jewellery scene with a quiet and humble air, belying his youth and immense success. As a boy, he grew up with his family in Annecy, France, trekking the mountain trails through the French Alps, as well as keeping a vegetable patch glistening with dew that would later inspire his designs glittering with diamonds and veins of emeralds.

At a young age, his resume is already distinguished beyond belief, after a technical background studying at the school of Haute École d’Art et de Design in Geneva, and three years spent in the Parisian workshops of Van Cleef & Arpels, he launched his own brand in 2017 and has since gone on to tend to his garden of jewels for over three years.

In 2019 de Grisogono, the Swiss jeweller, announced that Tarpin was going to be their first of an annual Artist in Residence. Amongst the designs created were the black and white diamond ‘Prologue’ jewels which were a perfect combination of de Grisogono’s style with a playful edge by the designer.

Today the jeweller keeps a rooftop jardin in Paris where he is able to cultivate and study plants at his leisure, inspiring his jewellery designs, from a desk overlooking the Eiffel Tower.