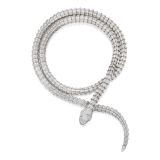 established 1884
Interested in selling a work by Bulgari?
Request an Estimate

Lots by Bulgari at Sotheby's

BVLGARI in the classical Latin alphabet is derived from the founder’s surname, a Greek silversmith, Sotirios Voulgaris (Italian: Sotirio Bulgari). Bulgari opened his first antiquarian and silversmith business soon after moving to Rome in 1881. In 1915, Bulgari decided to concentrate his business on Jewellery, giving up all of his other businesses, keeping only the Jewellery boutique in the heart of Rome on the prominent Via dei Condotti, 10.

Up until the 1960s, Giorgio, one of Sotirio Bulgari’s sons, constantly travelled between Rome and Paris to learn French savoir faire as fashion and jewellery design was dictated by Paris at that time. However, the 1960s also saw the development of the “Bulgari style’’; structured, three-dimensional and compact shapes with unusual colour combinations of precious gemstones. An article that was published in 1963 in Connaissance des Arts confirmed the distinctive characteristics of Bulgari Jewellery, ‘’Un bijou Bulgari se reconnaît comme se reconnaît un tailleur Chanel…’’ [A jewel signed Bulgari is as distinguishable as a Chanel suit…].

A large number of stars from around the globe, such as Sofia Lauren, Gina Lollobrigida and Ingrid Bergman, had a great admiration for BVLGARI’s jewels, wearing them to the most elegant occasions.