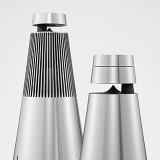 Interested in selling a work by Bang & Olufsen?
Start Selling

Sotheby’s and Bang & Olufsen are partners in celebrating innovative design with By Design, Presented by Bang & Olufsen, a series of stories and videos on Sothebys.com.

Bang & Olufsen was founded in 1925 in Struer, Denmark by Peter Bang and Svend Olufsen, two young and innovative engineers devoted to high-quality audio reproduction. Today, Bang & Olufsen is regarded as one of the world’s premier consumer electronics companies. It is known for its highly distinctive range of loudspeakers, televisions, music systems—products that combine technological excellence with ground-breaking design.

Over the last sixty years, Bang & Olufsen has worked with a host of distinguished product designers including Ib Fabiansen, Jacob Jensen, David Lewis, Torsten Valeur, and Cecilie Manz. Each of these designers has helped contribute to Bang & Olufsen’s longstanding reputation as a leader in design, craftsmanship, and acoustics.

In 1978, the Museum of Modern Art hosted an exhibition titled “Bang & Olufsen: Design for Sound by Jacob Jensen,” which featured the entire Bang & Olufsen product portfolio. In his introductory notes to the exhibit, MoMA curator J. Stewart Johnson wrote, “In seeking to domesticate sound equipment, Bang & Olufsen has visually de-emphasized the technical aspects of their components, making them virtual abstractions of the functions they are meant to perform. They are as well beautiful objects in their own right.”

Still at the forefront of domestic technology, Bang & Olufsen has more recently extended its comprehensive experience with integrated audio and video solutions to other areas, including automotive and portable products. Its current product range epitomizes seamless media experiences in the home, in the car, and on the go.