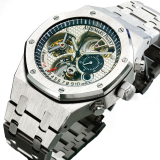 Interested in selling a work by Audemars Piguet ?
Request an Estimate

Lots by Audemars Piguet at Sotheby's

Founded in 1875 in the Swiss village of Le Brassus, Audemars Piguet has long been one of the most esteemed watchmakers in the world. The company’s namesakes, Jules Louis Audemars and Edward Auguste Piguet, were childhood friends who’d both had successful careers in the industry — Audemars as a designer of movements and Piguet as regulator — before they joined forces. So, almost from the moment it was established, Audemars Piguet had horological gravitas.

The manufacture’s creations certainly backed up its reputation: they debuted the world’s first minute-repeating wristwatch in 1892, the first skeletonized watch in 1934, and the world’s thinnest wristwatch in 1946. But it was in 1972 that Audemars Piguet introduced its greatest contribution to the history of watchmaking: the very first luxury sports watch, the iconic Royal Oak. The recent invention of quartz-powered movements posed a threat to traditional mechanical watchmakers so, in an effort to regain its relevance, Audemars Piguet commissioned legendary designer Gerald Genta to come up with something bold, modern, never seen before. Legend has it that Genta came back the next morning with sketches for the Royal Oak. The model was revolutionary; it introduced a whole new category of timepieces by utilizing steel, rather than platinum or gold, in a fine watch.

Today, the brand continues to riff on its signature model, including the rugged Royal Oak Offshore and the “Equation of Time” featuring a perpetual calendar, lunar cycle, sunrise and sunset times. Additionally, the Millenary and Jules Audemars collections explore innovations in complex complications from tourbillons to minute repeaters.