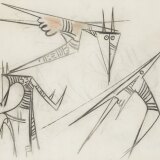 Works by Wifredo Lam at Sotheby's

One of the most renowned Cuban artists of the modern era, Wifredo Lam achieved an inventive synthesis of European modernism and Afro-Caribbean symbolism.

Wifredo Óscar de la Concepción Lam y Castilla (林飛龍) was born on December 8, 1902 in Sagua La Grande, Cuba, to parents of Cuban, Congolese and Chinese ancestry. His godmother was a celebrated Santeria priestess and the syncretic rites of his childhood would be a dominant influence in his later work. In 1916, Lam moved to Havana to study law, but soon abandoned that pursuit in favor of painting. After several years at the Escuela de Bellas Artes, he left for Madrid, where he studied with Fernando Álvarez de Sotomayor y Zaragoza, the director of the Museo del Prado. His work during the 1930s was influenced by the Cubist, Surrealist and Fauvist movements, and was enthusiastically championed by Picasso, who made the introductions that led to his first exhibition in Paris. Lam returned to Cuba in 1941; his attention to the island nation's fraught social conditions as well as its lush tropical flora led to a new pictorial vocabulary that featured chimeric figures with elements derived from local plants, African masks and mammalian limbs. Lam settled in Paris in 1952, and in 1960 established a studio and home on Italy's northwest coast with his wife and three sons. Having continued to exhibit his paintings and works on paper to worldwide acclaim, he started experimenting in metal and ceramics in the 1970s. He died on September 11, 1982 in Paris.

Lam's work is represented in the collections of the Art Institute of Chicago, the Hirshhorn Museum and Sculpture Garden in Washington D.C. and the Museo Nacional de Bellas Artes in Havana. In 2017, Sotheby's sold Lam's A Trois Centimetres de la Terre (1962) for a record-breaking $5.24 million.