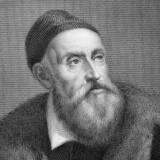 Born 1488. Died 1576.
Interested in selling a work by Titian?
Request an Estimate

Works by Titian at Sotheby's

Born Tiziano Vecellio sometime between 1488 and 1490, Titian was a leading figure in Italian Renaissance painting, the most important member of the Venetian school and one of the most versatile artists of his period, producing portraits, landscaped backgrounds, mythological and religious subjects with incredible facility and bravura. His unprecedented use of color, subtlety of tone and loose brushwork influenced countless artists and earned him such patrons as Pope Paul III, King Philip II of Spain and the Holy Roman Emperor Charles V.

Apprenticed to Giovanni Bellini and Giogione as a teenager, Titian was recognized as a master in 1516, when he realized The Assumption of the Virginfor the high altar of the Basilica dei Frari in Venice, where it is still in place. In its brilliant combination of several scenes taking place on different levels – heaven and earth, the infinite and the temporal – the work caused a sensation. During this period, the artist also painted half-length figures of young women; large mythological scenes such as Bacchus and Ariadne (1520–23); and small Madonnas set in beautiful landscapes, such as The Madonna of the Rabbit (1530).

Starting with The Death of St Peter Martyr (1529), the artist combined violence and landscape, creating a sense of drama that heralded the Baroque. During the next two decades, his portraits of princes, men of the church and artists radiated with their subjects’ interior life, while his 1548 portrait of Charles V established a new genre: the grand equestrian portrait. From 1550 until his death of the plague, Titian was largely in the employ of Philip II, for whom he created masterful mythological paintings such as Danaë(1553) and The Rape of Europa(1562).

Museums with Works by Titian

Artist Image: Credit: Georgios Kollidas / Alamy Stock Photo
Please note that prior performance of the indexes and realized returns contained herein does not guarantee future results. In addition, there is no guarantee that random collections of individual works of art or stocks will yield index returns. We are not financial advisors and we are not in the business of recommending art as an investment. We also have no comparative advantage in forecasting the future direction of the art market. Investment decisions should be based on the risk return tolerance and time horizon of the investor with, if desired, the support of a licensed financial advisor. This information is provided "as is" and with no representations or warranties either express or implied of accuracy, merchantability, fitness for a particular purpose or of any other nature are made with respect to this information or to any expressed views presented in this information.