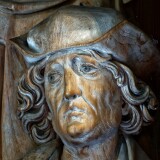 Works by Tilman Riemenschneider at Sotheby's 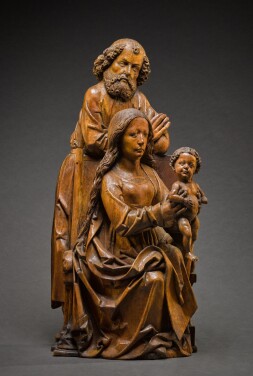 Arguably the pre-eminent German sculptor of the late Gothic period, Tilman Riemenschneider is celebrated for his distinctive, authentic manner of representing the human physiognomy in his favoured medium of limewood. His instantly recognisable figures are characterised by a fine sense of plasticity, combined with a profound psychological sensitivity.

Riemenschneider was born in Heiligenstadt in 1460. Little is known of the sculptor's early career, although it is likely he was apprenticed to a stone mason in Erfurt, specialising in carving alabaster. He settled in Ulm for a time, where he may have worked as an apprentice to Michel Erhart. A Settling and marrying in Würzburg in 1483, he became a citizen and a member of the painter's Guild of Saint Luke, achieving the status of 'Meister'. His new wife's wealth provided a large house with sufficient space for workshops and quarters for assistants, apprentices and his family. He subsequently received numerous commissions from various town councils, local patrons, as well as from clients in Franconia and Saxony. In 1504, he was elected to Würzburg city council and, in 1509, he was the first artist to enter the Upper Council. He was elected mayor of the town in 1520-21, by which time he had married for the fourth time. During the peasant revolt in 1525, Riemenschneider allied himself with the lower classes against the Prince-Bishop, Conrad von Thüngen. As a result of his actions, he was arrested, imprisoned and tortured. Riemenschneider's steadfast empathy during the revolt is manifest in the soulfulness of his sculpture.

The German sculptor's immense skill and talent is evident in his surviving works, notably the Holy Blood Altar in Rothenburg ob der Tauber, and the magnificent Mary Altar in Creglingen. After his death in 1531, interest in Riemenschneider's work waned considerably due to changing tastes as well as the Reformation. Most of his sculpture was destroyed or modified, which is why works of art attributed to him and his atelier are extremely rare. Since the 19th century, however, appreciation of Riemenschneider's work has been rejuvenated, and its timeless appeal continues to find diverse admirers today.

Museums with Works by Tilman Riemenschneider