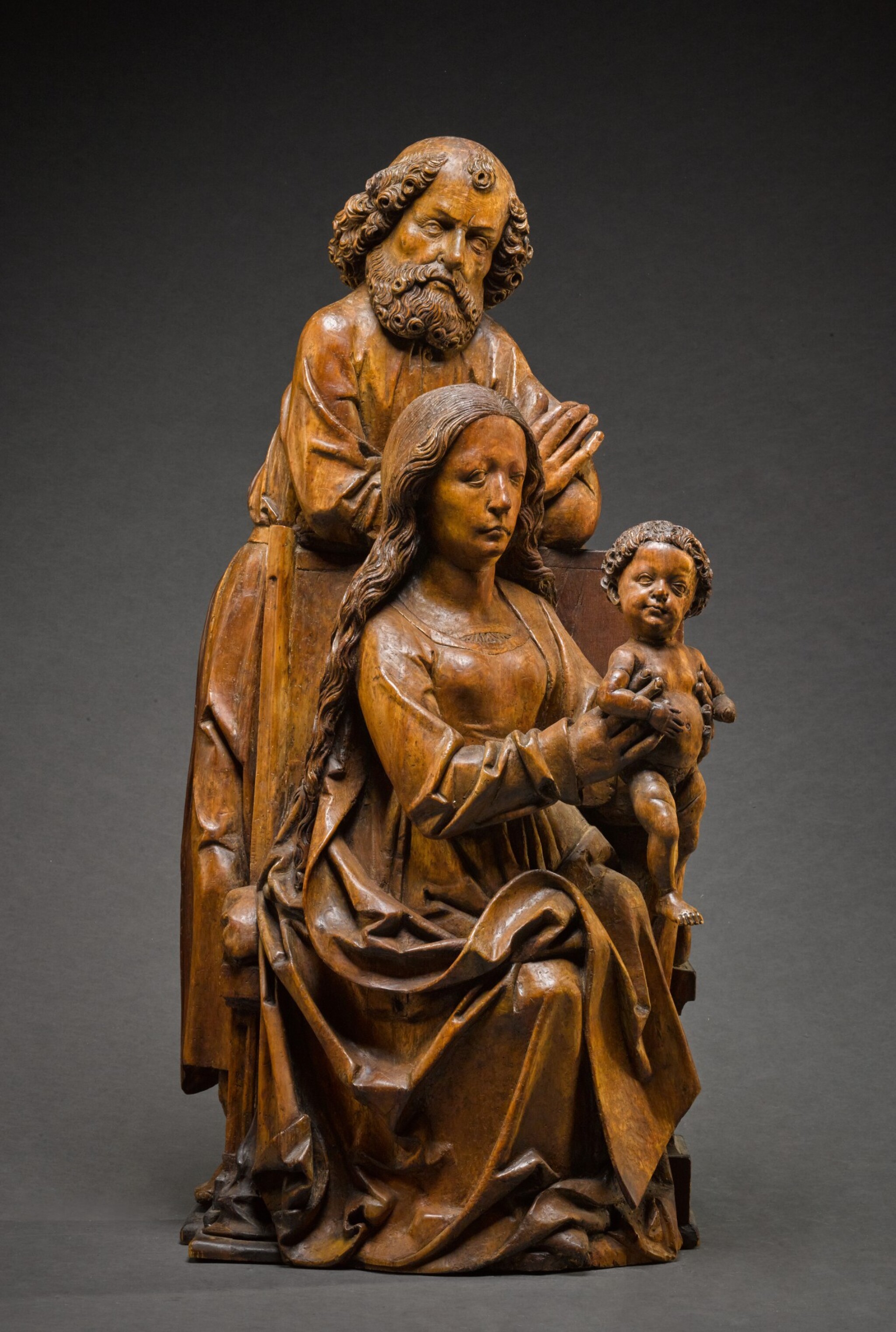 The sculpture suffered extensive worming in the past, and as a result there are areas of replacement, and the surface has been consolidated throughout. Otherwise the condition is good, with some wear and dirt to the surface consistent with age.

There is evidence of past worming throughout; many of the worm holes have been filled and blended into the surface. Several joints are visible, which represent either separately carved sections, reattachments or restorations, including at: the Christ child's feet, around his neck, his proper right hand (which is restored), around the Virgin's nose, the Virgin's hands, and there is a possible reattachment to the drapery at the front at the bottom, while the Virgin's proper left foot is possibly restored. The Child's proper right hand is lost.

There minor stable splitting to the wood consistent with the material, some of these splits have been filled or reinforced, including at Joseph's head. There is a possibly restored split running through the Virgin's proper right arm and her drapery.

There is some glue or wax residues to the Child's face. There are a few natural knots in the wood, including to the Child's proper left cheek. A dark brown lacquer has been applied to the hollowed back.

Almost certainly carved by an assistant in the workshop of Tilman Riemenschneider, this beautiful group of the Holy Family represents an important art-historical document in the reconstruction of the great late-Gothic sculptor’s oeuvre. It is one of only two known versions of this motif associated with Riemenschneider’s workshop, while the master’s prototype, which would have formed part of a larger ensemble showing the Holy Kinship, is lost.

Tilman Riemenschneider is known to have created at least one altarpiece with the Holy Kinship in the first decade of the 16th century. Three individual groups, which are generally considered autograph and formerly part of the same such altarpiece – though this latter point has been disputed – have long been known to the scholarship. Today these fragments are dispersed between the Skulpturensammlung SMBPK, Berlin (Saint Anne with her three husbands), the Landesmuseum Württemberg, Stuttgart (Mary Cleophas and Alphaeus, inv. no. 1994-193), and the Victoria and Albert Museum, London (Mary Salome and Zebedee, inv. no. 110-1878). Placed beside each other – as they were during an exhibition in Munich in 2000 – the three groups form a near-complete ensemble illustrating the Holy Kinship which, however, lacks the Holy Family at its centre.

The 'missing link' is provided by the present group, as well as a polychromed variant of the composition housed in the Mainfränkisches Museum, Würzburg, alongside a group of Saint Anne and Joachim, whose figure of Anne closely follows the Saint Anne in the Berlin relief (Muth, op. cit., no. 42). Attributed to Riemenschneider’s workshop or close circle, the Würzburg Holy Family is near-identical in composition to the present group in the figure of the Virgin, but differs in the pose and physiognomy of Joseph, as well as the loss of the Christ Child in Würzburg. Though published as early as 1905 as part of the renowned collection of Carl Roettgen in Bonn, it was not until 2002 that the present Holy Family was formally discussed in the context of Riemenschneider’s Holy Kinship retable. As the only complete version of the subject from Riemenschneider’s workshop, it was described by Norbert Jopek (op. cit.) as 'perhaps the closest reflection of the now lost prototype from the left of the centre group'.

The compositional proximity of the Würzburg Saint Anne fragment to the autograph Kinship groups indicates an origin between circa 1505 and 1510. A similar dating can be proposed for the present group, which finds even closer stylistic parallels in the work of the master and his assistants. A notable comparison for the head of Joseph is found in a stone Saint Peter from the Agony in the Garden in the Church of Saint Burkhart in Würzburg, dated to 1511 (Muth, op. cit., no. 17), whose hairstyle, beard, physiognomy with pronounced cheekbones and furrowed brow correspond almost exactly to the figure in the present work. Compare also the head of the disciple immediately to Christ’s proper right side in the Last Supper at Rothenburg ob der Tauber, dated 1502 (see Lichte, op. cit., fig. 293). The Child proffered by the Virgin displays the slender limbs characteristic of Riemenschneider’s children whilst showing rare sophistication in its frank and direct gaze at the viewer.