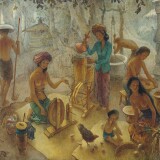 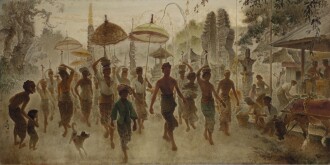 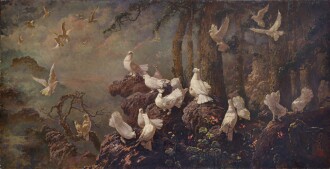 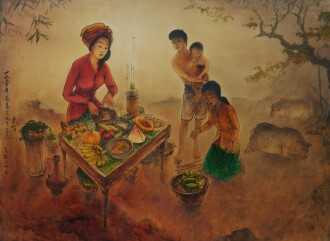 Chinese painter Lee Man Fong trained in China and in Western Europe, and lived much of his life in Indonesia, developing a particular style that blends together a variety of sources for his quiet yet passionate vision. He often turned to Chinese brushwork and technique in painting his scenes that relied on Western visual conventions. A leading painter and curator, his pioneering vision established the Nanyang style in the 20th century in Indonesia.

Lee was born in 1913 in Guangzhuo, China, to a family of ten children. After his father’s death, Lee began working to help support his family, producing images for advertisements. The family moved to Singapore and eventually settled in Jakarta in 1930, where Lee secured a job at Kolff, a Dutch printing company. He became the first non-Dutch artist to be invited to provide works for an exhibition organized by the Dutch East Indies Association. Despite his growing artistic success, he was arrested by the Japanese military government in 1942 for his participation in the revolutionary group Fu Xing She; his jailer, Takahashi Masao, was an admirer of his work and as such, secured his early release within months. As his artistic profile continued to rise, he was awarded a Malino scholarship to study in the Netherlands for three years based on the recommendation of the Dutch Viceroy Hubertus van Mook, for whom Lee had produced a portrait. He exhibited consistently and sold successfully in the Hague and at the Salon in Paris. After his return to Indonesia in 1952, he arrived at his mature style which integrated Western, Chinese and Indonesian traditions in bold yet delicate compositions. In 1961, he was named consultant to the Presidential Palace and the chief curator of its art collection. He continued to exhibit in Indonesia and was heralded as a major artist of the period. His final solo exhibition at the National Gallery in Singapore was a major success, and he donated its proceeds to the National Kidney Foundation.