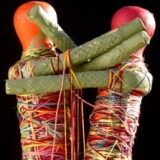 Renowned American fiber sculptor Judith Scott’s artistic career began at age 45, after facing uncommon hurdles and hardships. Born with Down Syndrome, deafened by scarlet fever and separated from her family to live in a spiritless state-run institution for most of her adult life, it was only after reuniting with her long-lost twin and enrolling in a fiber class at Creative Growth, an art center for people with developmental disabilities, that her career began in earnest. While other participants cut, wove, and stitched, Scott intuitively developed a strikingly distinctive sculptural practice: cocooning found objects with layers of meticulously-chosen colored yarn and twine. These enigmatically expressive, sometimes totemic objects occupied Scott for the remaining eighteen years of her life and, once brought to wider recognition, became some of the most sought-after works within the vibrant and capacious realm of self-taught and outsider art.

Judith Scott was born on May 1, 1943 in Cincinnati, Ohio, along with a twin sister, Joyce. Judith's developmental disabilities were immediately apparent, but her deafness, which resulted in infancy as a result of scarlet fever, was not. Due in large part to this grievous oversight, Judith was declared “ineducable” and upon the prevailing medical advice was placed in the Columbus State Institution at the age of seven. For thirty-five years, she was deprived of any training or community habilitation opportunities, as well as meaningful contact with her family; finally, in 1985, Joyce was able to secure Judith's legal guardianship and brought her to live with her in California. After her artistic breakthrough, Judith was sedulously devoted to her work, and participated at several exhibitions, including a group show of Creative Growth artists at the Ricco-Maresca Gallery in New York. Her first solo show, Metamorphosis, was mounted in 2000 at Chicago's Intuit Gallery, and coincided with the publication of a monograph of the same title. Judith Scott died of natural causes on March 15, 2005, having outlived her life expectancy at birth by half a century.