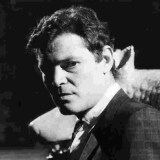 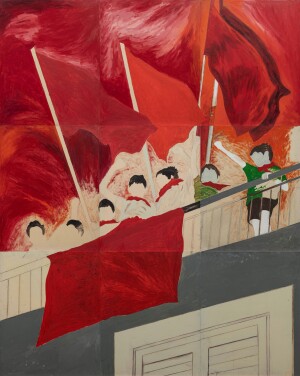 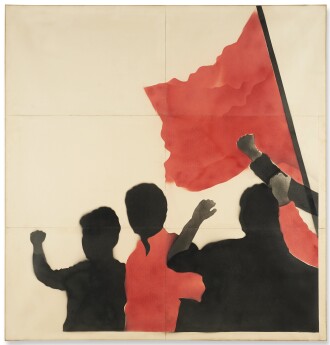 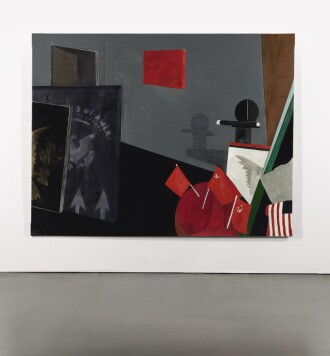 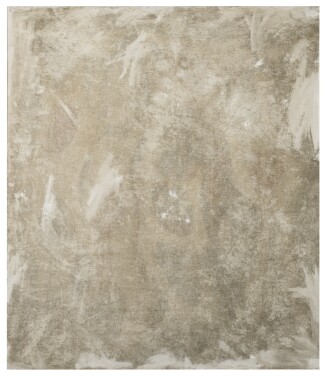 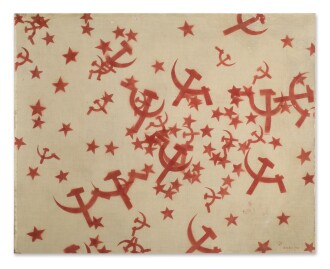 Angeli was born in Rome in 1935. He comes from a family of a solid, socialist tradition. Self-taught, it was through the sculptor Edgardo Mannucci by which he was faced with the work of Burri. His works will therefore influence Angeli with his informal poetics. Angeli’s first works (1955-1957) included monochrome and material canvases in dark tones covered with torn nylon socks, which symbolizes poverty and pain. Because he was politically active (he joined the Communist Party), he met Tano Festa and Mario Schifano in 1955, with whom he established a deep relationship of friendship and cultural exchange.

Together with Francesco Lo Savio, Pino Pascali, Jannis Kounellis, and Fabio Mauri they will give life to School of Piazza del Popolo, which has La Tartaruga by Plinio de Martis in its galleries. The evident influence of American pop art is overcome by using ancestral symbols and ideological emblems (the scythe and the hammer, as well as the swastika) that act directly on the unconscious of the observer.

He also participated in the Venice Biennale presented by Maurizio Calvesi and, the following year, at the IX Roman Quadrennial. It participates in 1967 at the São Paulo Biennial of Brazil. At the end of the 1960s Angeli was involved in the Vietnam war. Later in the 1980s his artistic career approached figuration where he utilized stylized shapes and portrayed symbols of his childhood, obelisks, deserted city squares, and capitals.