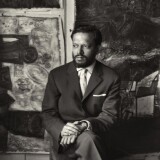 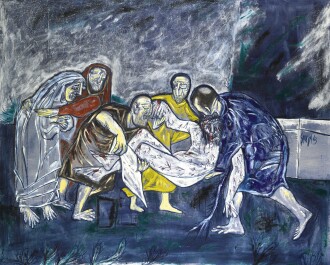 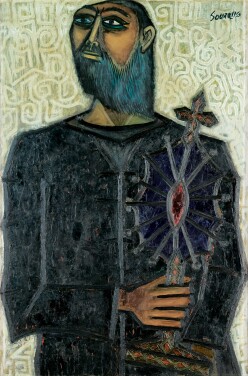 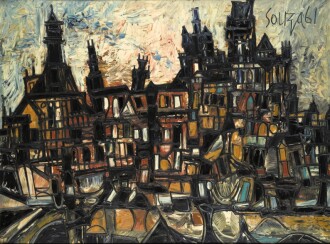 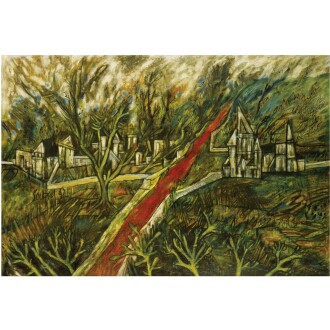 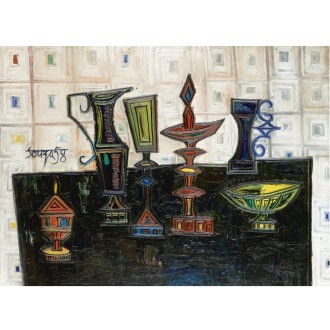 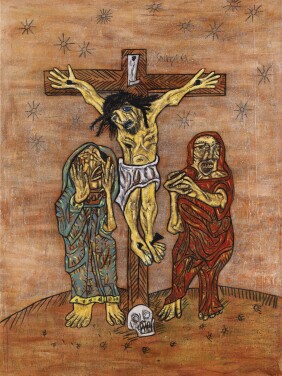 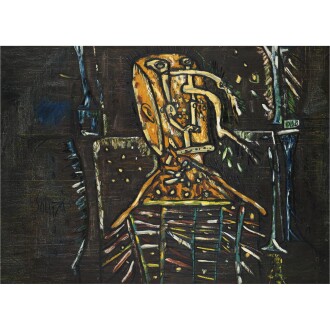 Francis Newton Souza was one of the founding members of the Progressive Artists’ Group (PAG). In 1947 Souza, Syed Haider Raza, K. H. Ara, Maqbool Fida Husain, H. A. Gade and S. K. Bakre broke away from the conservative style of pre-independence India, and moved towards an incorporation of Post-Impressionism, Cubism and Expressionism with traditional Indian art; the PAG became one of the most influential art movements in India.

Francis Newton Souza was born and brought up in the Portuguese Catholic colony of Goa. It was here that he encountered the religious iconography that was to provide him with much of his artistic vocabulary. His oeuvre includes a multitude of works depicting Christ, the Church, the Pope as well as still-lifes of religious objects. “An Indian painter, brought up a strict Roman Catholic under Portuguese colonial rule, later a member of the Communist Party and now (1961) living in London: these are the barest details about one of the most gifted and original modern artists. Those writers on art who even today look upon all new painting as the result of age-old cultural roots, must be rather baffled by such a history, for it bears witness to a great number of contradictory influences which make nonsense of conventional ideas of tradition” (E. Mullins, ‘Preamble’, Souza, Anthony Blond Ltd., London, 1962, p. 5). Notable Indian and Western critics and viewers who have followed Francis Newton Souza’s almost seven-decade long career, attached great significance to his upbringing and formative years as they impacted his contemptuous and anti-clerical work vis-a-vis the Catholic Church.

After moving to England in 1949, Souza was granted a government scholarship and research trip to Europe. Plunged into the complex and vibrant cityscapes of Rome and Amsterdam, Souza’s experience of various metropoles across the continent was evidently an important source of inspiration. Souza has an enduring fascination with skylines, but one that remains deeply rooted in the post-war moment of disrupted discourses and shattered forms.
Noted critic Edwin Mullins states that Souza has 'succeeded in creating images which are entirely personal, yet recognizable at the same time. They are often distorted to the point of destruction - houses no more than lopsided cubes...but they never threaten to dissolve into formalized abstract shapes. The violence and speed with which they were executed keep these images, however distorted, in touch with the painter's vision of what they really are.' (E. Mullins, Souza, Anthony Blond Ltd., London, 1962, p. 37).

By the mid-1950s, Souza’s artistic reputation in England was rapidly growing. In 1955, Souza had his first one-man show at Gallery One in Mayfair, London, which was received with much acclaim as a sell-out show. That same year, Souza's autobiographical essay Nirvana of a Maggot was published by Stephen Spender in Encounter magazine. The following year, in 1956, Souza met Harold Kovner, a wealthy New Yorker, who went on to become the artist's patron for the next four years.

In the Spring of 1960, Souza travelled to Italy and Europe on an Italian Government scholarship nominated by the British Council. Works from this brief period in Rome are infused with an elated, expressive energy, repeatedly revelling in red. Souza’s choice of red is not only eye-catching but powerful, as the colour possesses biblical significance as the liturgical colour for Pentecost, the celebration of the Holy Spirit in Roman Catholicism. He spent several months there producing a body of paintings exhibited in another solo show at Gallery One, titled Twenty-seven Paintings from Rome. It was also the same year he returned to India for the first time in eleven years. He spent several months there, including a visit to Goa during the summer. During his travels, Souza could ruminate on undiluted Roman Catholicism encountered in Rome and Goa. By incorporating the spiritual influences of his childhood within tightly ordered compositions, Souza has created a body of work where religion and Modernity coexist. Souza was undeniably influenced by the various currents of European Modernism, and his works from the 1950s, in particular, manifest certain expressionist qualities, most vivid in his iconic and extensive series of portraits.

Souza returned to India shortly before his death, he passed away in 2002.