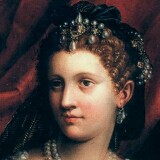 Works by Fede Galizia at Sotheby's

Born in 1578 in Milan, Italy, Fede Galizia, like many female artists of her time, was the daughter of a painter (a miniaturist), who is assumed to have taught her his craft. Little is known of her life, but her skill as a painter was first noted by Italian historian Giovanni P. Lomazzo when she was just 12 years old, and she was widely considered a prodigy. By the time she was a teenager, she was recognized internationally as a skilled portraitist.

As her career evolved, Galizia began completing still life paintings in the Northern European style—a shift in mode that some art historians have correlated with the presence of acclaimed still life painter Jan Breughel in Milan in 1595. Although her initial still lifes were austere studies of subject matter, as her style evolved, they gave way to lavish and decadent compositions typically associated with Flemish artists. The exact date of her death is unknown, but she had her will drafted in 1630, the time in which the Italian plague was sweeping the country—it is assumed she fell victim to the disease and died around this time.

Today, her work can be found in the collection of the Galleria degli Uffizi, Florence; the Royal Collection Trust, London; and the Metropolitan Museum of Art, New York; as well as in numerous private collections worldwide.

Museums with Works by Fede Galizia