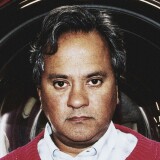 Born 1954.
Interested in selling a work by Anish Kapoor?
Get an Estimate

Works by Anish Kapoor at Sotheby's

British contemporary artist Anish Kapoor has created a number of the world’s most recognizable contemporary public sculptures, including Cloud Gate in Chicago’s Millennium Park completed in 2006 and the ArcelorMittal Orbit for London’s Queen Elizabeth Olympic Park in 2012. Kapoor is known for his material and space investigations, often working with large-scale mirrors, natural stone and PVC to create and explore voids, negative space and ideas of physical experience and nothingness. Born in Bombay in 1954, Kapoor moved to London in the late 1970s, studying at the Hornsey College of Art and the Chelsea College of Arts. He gained recognition for his site-specific biomorphic sculptures in the 1980s made of limestone, marble and plaster. His early works play with notions of disappearance or partial existence, embodied in his use of ground and powdered materials. As Kapoor’s works expanded in size, they continued to emphasize the inherent dualities of the material and non-material. Many of his later works embody the perfected finishes of stainless steel or distort through mirrored spaces. His monumental objects border on architectural, and Kapoor has collaborated with architects, engineers and designers throughout his career.

Kapoor’s extensive accolades and awards include the 1991 Turner Prize; the 2011 Praemium Imperiale; and the 2016 LennonOno Grant for Peace. He was named Commander of the Order of the British Empire in 2003, was knighted in 2013, and holds honorary fellowships from the London Institute, Leeds University, and the Royal Institute of British Architects. He was the recipient of the $1 million Genesis Prize in February 2017 for his achievements for the Jewish community and the State of Israel. In 2009 he became the first living British artist to exclusively occupy the Royal Academy with a groundbreaking solo exhibition. His works are included in the collections of the Museum of Modern Art, New York; the Tate Modern, London; the Guggenheim Museum, New York; the Moderna Museet, Stockholm; and the 21st Century Museum of Contemporary Art in Kanazawa, Japan.

Museums with Works by Anish Kapoor