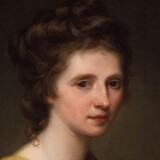 Born 1741. Died 1807.
Interested in selling a work by Angelika Kauffmann?
Get an Estimate

Works by Angelika Kauffmann at Sotheby's 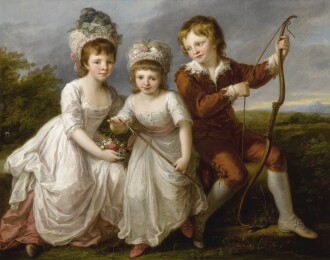 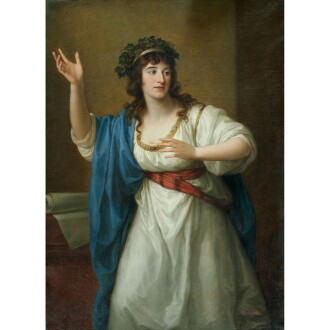 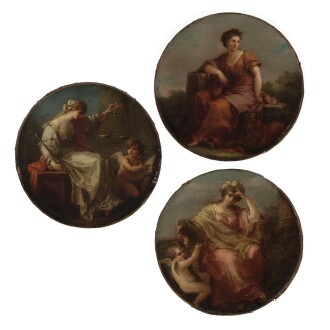 Angelika Kauffmann was born in 1741 in Switzerland, to Cleophea Lutz and Johann Joseph Kauffmann, who was a painter. From a young age, her parents encouraged her pursuits in both music and painting, and she was exceedingly well educated for a girl of her time, and, in many regards, was considered a prodigy. By her early teens, she began working as an assistant to her father, and began completing her own compositions and portraits. Accompanying her father on his extensive travels throughout Switzerland, Austria and Italy for work allowed her to visit and study a wide breadth of Renaissance masterpieces, as well as be exposed to developing Neoclassicism.

Following a several year stint in Italy, during which time she honed her skills as a painter and began developing relationships with several prominent clients, she relocated to London, England, where her career flourished. She received many prestigious royal and aristocratic portrait commissions, and exhibited consistently at the Royal Academy. Also while in London, she met and married fellow painter Antonio Zucchi, whom would help manage her business in place of her father.

In 1781, Kauffmann and her husband, as well as father (who unfortunately died during the journey), relocated permanently to Rome, Italy. Shortly thereafter she opened a public studio near the Spanish Steps, and her career continued to blossom, garnering her an international clientele and continuing commissions. Of her many prestigious commissions, the largest was a portrait of the Royal Family of Naples, made at the behest of the King and Queen of Austria.

Upon her death in 1807, her fame and renown as an artist led to her funeral being directed by acclaimed Neoclassical artist Antonio Canova, who based the event on the funeral of the Renaissance master Raphael. Today, her work is held in prestigious collections worldwide, including the National Portrait Gallery, London; Tate Britain, London; the Metropolitan Museum of Art, New York; the Hermitage Museum, Saint Petersburg; and the Louvre Museum, Paris.

Museums with Works by Angelika Kauffmann

National Portrait Gallery, Smithsonian
Washington, DC | DC
Tate Britain
London
The Metropolitan Museum of Art
New York, New York | New York
State Hermitage Museum
St Petersburg
Musée du Louvre
Paris
Please note that prior performance of the indexes and realized returns contained herein does not guarantee future results. In addition, there is no guarantee that random collections of individual works of art or stocks will yield index returns. We are not financial advisors and we are not in the business of recommending art as an investment. We also have no comparative advantage in forecasting the future direction of the art market. Investment decisions should be based on the risk return tolerance and time horizon of the investor with, if desired, the support of a licensed financial advisor. This information is provided "as is" and with no representations or warranties either express or implied of accuracy, merchantability, fitness for a particular purpose or of any other nature are made with respect to this information or to any expressed views presented in this information.