Hong Kong – It is Sotheby’s privilege to present “Yamaguchi Takeo – Composing Monochrome” – the first dedicated Yamaguchi Takeo auction ever to appear on the market. The sale honours the extraordinary career of one of the most important pioneers of Japanese abstraction whose discreet yet far-reaching influence was critical in shaping the post-war Asian avant-garde.


In the 1950s and 1960s, a time when the global art scene was dominated by the gestural tides of Informel and Abstract Expressionism, Yamaguchi forged an austere minimalist aesthetic defined by pared down forms, thick organic textures, and a signature palette of black, ochre yellow and Venetian red. Wholly unique and unlike any other artistic trend of the time, Yamaguchi’s iconic style resonated with quiet yet unwavering strength, articulating an emphasis on materiality and texture, process and repetition, and a strict limitation of colour that foregrounds the life and breath of paint. All of these were singular visions and philosophies that proved markedly ahead of his time, and which heralded the 1970s wave of monochrome artists in Asia.

Indeed, unbeknownst to the international world, Yamaguchi played a direct personal role in nurturing – financially as well as artistically – the frontiers of the Japanese and Korean avant-garde. Amongst his protégé was the great Korean artist and thinker Lee Ufan (b. 1936), who openly acknowledged Yamaguchi’s influence on his work and thought, as well as Korean abstract pioneer Kim Whanki (1913-1974), to whom Yamaguchi supplied brushes, oils, and canvases during difficult times. Yamaguchi was also universally loved and respected by his Japanese students at the Musashino University of Art, where he taught for two decades. Such little-known local histories, lost in the tides of ambitious international art movements, stand as testament to Yamaguchi’s crucial role in the development of Asian contemporary art.

In effect, Yamaguchi single-handedly composed a ‘one-man’ monochrome symphony that held sway in the international arena for over five decades. In the mid-1950s Yamaguchi represented Japan at the Sao Paolo and Venice Biennales, and by the mid-1960s he had exhibited at both the Solomon R. Guggenheim Museum and the Museum of Modern Art in New York. His iconic style evolved gracefully and organically throughout his long life, always retaining a distinctly “Yamaguchi” aesthetic whilst never diminishing in visual and sensorial vitality. The present sale traces the elegant evolution of his vision from the 1930s through to the 1980s, awarding due honour to one of the most ground-breaking yet overlooked legacies of the twentieth century. 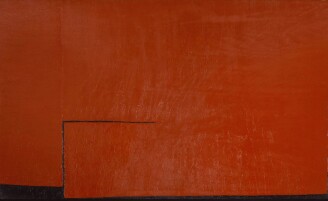