On 31 March, The Philanthropist's Cellar: An Extraordinary Collection Sold to Benefit Charitable Causes will be auctioned in Hong Kong. Proceeds from the 800 lots will benefit the improvement of the health and educational conditions of children and young people in rural China. Ahead of the sale, Scott Rozelle, professor at Stanford University and director of the Rural Education Action Program (REAP), tells us more about this important and potentially life-changing program.

For the last fifteen years, whenever I brought new students or colleagues with me to rural China for the first time, I would always make the same joke. I would pull a hundred-yuan bill from my pocket and hold it up for everyone to see.

“You see this?” I would say, looking around theatrically. “Whoever can find a working age man in this village gets one hundred yuan. He has to be between 18 and 40, and he has to be healthy.”

Everyone would laugh, thinking one of them was about to make some easy money. But every time, as we went about our work in the village, they would keep an eye out for a young man, any young man, only to have none appear. By the day’s end, I had always won my bet.

This simple joke illustrates a broader point that is critical to understanding rural China. China’s rapid economic rise was brought about through an enormous expansion of jobs in the cities. Given that the majority of the population was born and grew up in rural areas, this has meant massive rural to urban migration over the past several decades; the largest migration in human history.

This trend has been so persistent that for years and years, I never lost my bet.

But recently, something fundamental has begun to change. Just a few months ago, I was back in another rural village with a new colleague. I held up that same old hundred-yuan bill and made the same old joke, asking my guest to try to find working age men in the village. To my shock, we suddenly discovered there were young men everywhere.

On one block, three of five families had young men home. On the next block, a group of men were sitting outside and talking. One man I found smoking a cigarette in the driveway of his house, sitting astride his parked motorcycle. He was in his early twenties. I asked him what he was doing in the village. “Well, I’ve been working construction in the city for a few years, but they shut down my site recently—just stopped construction in the middle of the building. At first I thought it was no big deal, sometimes a site does just close. I’ll find another job, I thought. But I looked everywhere for a month and a half. No one’s hiring. What could I do but come home?”

His wife came out of the house. She looked about seven months pregnant, and balanced a toddler on her hip. She walked over to join our conversation. "We don't know what to do," she said. "None of us ever imagined there would be no jobs. A bunch of our friends are stuck back in the village too, for the first time any of us can remember."

Her husband did not mince words. "We're sure as hell not going to stay here and farm in this backwater," he said, stubbing out his cigarette. "I have never farmed in my life and I have no intention of starting now."

Right now, as you sit reading this, a massive drama is beginning to unfold in China. This is not a story that you have heard elsewhere. Indeed, almost no one inside or outside of China is aware of the enormity of what is coming.

For all of the wise decisions the Chinese government has made in the past decades to bring about China’s rapid rise—liberalizing markets, building roads and public transportation, investing in budding industries and R&D—China has failed to invest in its single most important asset: its people. Today, China may be the second largest economy in the world, but it has one of the lowest levels of education of any country in the world. Data from the national census reveals that only 30% of China’s current labor force has a high school education. This is lower than any country at China’s level of development, and even lower than many poorer countries.

Even among 15-17 year-olds (tomorrow’s workers) the education rates are staggeringly low. Only half of China’s young people are getting a basic high school education. This is an almost unbelievable oversight. Sure, China’s urban elite are excelling, attending the world’s best universities and outscoring all other countries on international scholastic tests. But educational resources have been allocated in a fundamentally unequal way, and the vast majority of the Chinese population has been left far behind. Only a fraction of rural children are finishing academic high school. Less than 10% go to college.

China’s future depends on giving all children—rural and urban alike—the tools that they need to learn, thrive, and contribute to the country’s growing economy.

As a Stanford University economist, I have been working exclusively on China for the past forty years. While reporters looking to understand China’s future are focused on macroeconomic and geopolitical indicators, my work explores a side of China that far too few people seem to be aware of: the poor, rural interior.

My research over the past four decades has revealed that rural Chinese children have been systematically excluded from the opportunities that have been brought to China’s elites. Children in rural China are undereducated, undernourished, and suffering in large numbers from easily treated health issues. And, because the people of the poor interior make up half of China’s population, their lack of education is setting China up for failure and instability.

As a professor, I give a lot of presentations every year. Month after month, I travel around the world, including inside China, presenting my research to fellow academics, to students, to government officials, businesspeople and policymakers. In all of these talks, the results I present are inevitably met with shocked silence.

The other problem is that rural China itself has become invisible to the rest of the world. The global influx of Chinese luxury consumers, world travelers and Internet users makes China’s urban elites highly visible throughout the world. They traipse through Disneyland and Times Square. They are on the cover of Time Magazine and the Washington Post. For the casual observer reading the news about China, it would be easy to think the biggest problems in China today are too many spoiled children and SAT scores that are not high enough to get into Harvard. And yet, China’s cities are islands of prosperity in a country where more than half of the citizens are still struggling just to get by.

Rural China has also become invisible to the Chinese themselves. It has become hard for rich and prosperous Chinese to even see their rural countrymen. Cross-country business trips or visits home to see family used to be taken in buses and slow trains, with rural villages visible through the open windows and at the frequent stops along each route. Today, city people hurtle past poor rural areas at 300 kilometers per hour on high-speed trains or hop over them on increasingly affordable flights in Boeing and Airbus jets.

The result is that China has a massive crisis on its hands. Though the scale and the stakes of this problem could not be higher, there are steps that can be taken. I founded the Rural Education Action Program (REAP) in order to help highlight this path. Drawing on a pragmatic approach to data collection and evidence-based solutions, we demonstrate that even massive problems often have remarkably simple solutions, provided that there is sufficient political will to take action.

REAP has already proven that policy change is possible. In 2009, in part in response to a REAP study, the central government expanded coverage for early childhood education from 20% to 60% of the rural population—an overall expansion from 2 million children to over 7 million. Following REAP’s research-based and high- level policy advocacy, national financial aid was expanded in 2010 to cover the high school tuition of 20% of all poor high school students, allowing 2 million poor students to attend high school free of charge. After more than seven large scale Randomized Controlled Trials and three formal policy briefs reporting on the results, the central government launched a two billion dollar per year nation-wide school nutrition program in 2011, delivering free lunch every day to 35 million poor students.

These successes show the immense good that can be wrought through well-targeted policy action. In forty years of work, we have documented the barriers that are preventing aspirational, hard-working families from getting ahead and we have found cost-effective, practical solutions to overcome many of these barriers. We have learned that well-targeted changes in policy (often within existing channels) can have huge impacts for setting China on the right course and forestalling unnecessary human suffering.

Join us on 31 March for The Philanthropist's Cellar: An Extraordinary Collection Sold to Benefit Charitable Causes in Hong Kong, with proceeds benefitting the improvement of the health and educational conditions of children and young people in rural China.

Read more about the sale:
Blockbuster Bordeaux from a Philanthropist’s Cellar
An Extraordinary Inspection: The Philanthropist's Cellar 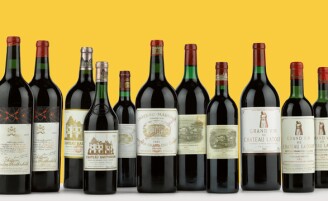