Comparatively rare in earlier art, paintings of Paris and its street life began to flourish in the 19th century as the city witnessed the birth of modern art. Four views in the forthcoming 19th Century European Paintings sale at Sotheby's on reveal different perspectives on the ever-changing city, known as the 'capital of the 19th century'.

De Nittis painted this view looking towards the Arc de Triomphe under scaffolding in 1875, the year after the first Impressionist group exhibition, and four years after the monument's damage in the Siege of Paris. Full of chance and captured as if in an early photograph, the scene focuses on the elegant riders moving towards the Bois de Boulogne. Autumn turns to winter with the falling leaves of the chestnut tree, a recognisable feature of Paris' boulevards today.

Painted the year after De Nittis' view, Grandjean captures the bustling energy of one of Paris' Grands Boulevards, as the newly-confident city emerged from the shadow of the Prussian defeat and Commune. A ‘H’ line coach emerges from the Rue de Richelieu on the left, next to the Café du Cardinal (which still exists), while an a man (possibly Grandjean himself) carries a large canvas on his back. While the Haussmanian architecture is recognisable in today's Paris, the nearer buildings to the right were later demolished to make way for the Boulevard Haussmann in the early 20th century.

In Loir's monumental panorama Paris is seen at the height of the Belle Epoque, during the 1900 Exposition universelle – the largest world's fair the city had hosted. The buildings to the left appear to be the Greek and Serbian national pavilions, while the unmistakable silhouette of the Tour Eiffel lies behind, and the former towers and dome of the former Palais du Trocadéro are visible to the right. Reflecting the golden light of the setting sun, the Seine takes centre-stage, while countless red, green and yellow lights punctuate the composition in a dazzling, atmospheric tour-de-force.

Calmer than the artist's view of the Boulevard des Italiens, here the Arc de Triomphe is visible in the distance from along the Avenue du Bois de Boulogne, now known as the Avenue Foch. Grandjean's elegant scene, capturing Paris' beau monde along one of its most prestigious streets, reveals a city still driven by horse power. 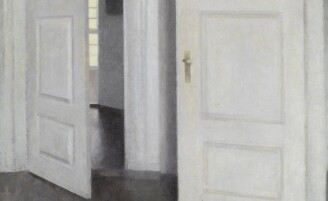