Provenance is a fundamental part of Sotheby’s auctions and wine sales are no different. Among the stellar wines presented in Finest & Rarest Wines (21 March, London) are three magnums from two of the most iconic vintages of the 20th century: 1945 and 1947. The wines were produced just after the end of the Second World War, in liberated but difficult times.

1945 is considered by many as one of the best Bordeaux vintages of all time and Château Mouton Rothschild is a stellar example of this. Its label, inspired by Winston Churchill’s iconic gesture, is emblazoned with a golden V and a laurel wreath and declares 1945 as “Année de la Victoire” – the year of victory.

1947 was nearly as acclaimed: Cheval Blanc is not only the most famous 1947 but also one of the greatest Bordeaux of all time, while Petrus, though not as port-like as Cheval Blanc, is considered by many as one of the wines of the century.

As part of a comprehensive authentication process, which took more than a year to conclude, all three of these legendary wines have been independently examined and verified by the Châteaux, as well as third parties including the Bordeaux Nuclear Research Centre (Arcane).

The Finest & Rarest Wines sale is in London on 21 March. 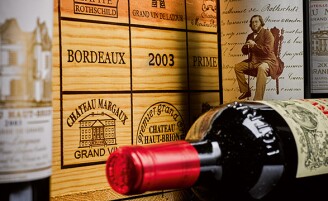