Exceptionally rare depictions of Chaïm Soutine's studio in Montparnasse, La Cité Falguière and L’Atelier de l’artiste à la Cité Falguière from the collection of Barbara and Ira Lipman are also some of the earliest known landscapes by Soutine. Both works are included in Sotheby's Impressionist & Modern Art Day Sale, open for bidding from 10 - 19 November.


O n June 14, 1913 – one year before the outbreak of the First World War and seven years after Captain Dreyfus’s exoneration – a 20-year-old Soutine arrived in Paris, ready to begin his formal education at the École des Beaux-Arts. He left Smilovitchi, the shtetl in present-day Belurus where he grew up, with just a pocketful of loaned rubles – but in Paris’s Montparnasse studios in La Ruche, he was able to find economic accommodations (as well as a supportive creative community).

Designed by sculptor Alfred Boucher, Montparnasse was a bohemian haven for young artists, a place where they could cheaply live, share ideas and create. The vibrant atmosphere of the artist complex must have felt familiar to Soutine, as Smilovitchi, described by art historian Esti Dunow, was “a gray mass of ramshackle wooden houses,” where “extremely high value was placed on emotional expressiveness and feeling. Students and former inhabitants of the shtetl constantly point to the texture of daily life as being full of energy, noise and agitation.”

In Montparnasse, Soutine found a community of fellow young immigrants, artists and bohemians; this early chapter in the artist's career was pivotal to the development of his mature style, and today is regarded with near mythical revere among collectors.

La Ruche brought Soutine to his circle, which included Chagall, Lipchitz, Léger and Kisling, among others; and not far from La Ruche stood another set of ramshackle artist studios, the Cité Falguière, as depicted in La Cité Falguière, where Modigliani had painted sporadically since 1909. These two Jewish painters had different backgrounds, temperaments and artistic styles – and Modigliani was a good decade older – but the pair developed a close friendship that lasted until Modigliani’s untimely death in 1920. Both were described as peintres maudits and ended up in the same tenement.

“One day I arrived around 11pm or midnight at the Cité Falguière. Modigliani had thrown away all the furniture because it had been infested with bedbugs. I entered…Modigliani and Soutine were lying on the floor. Of course, there was no light or gas. They held each a candle in their hands; Modigliani was reading Dante and Soutine, ‘Le Petit Parisien’.”

Modigliani admired Soutine’s work and introduced him not only to his dealer Léopold Zborowski but also to the Castaings, his most loyal sponsors. Soutine's wild and spontaneous painterly style was alien to Modigliani, who, to describe his own state of inebriation once joked: "Everything dances around me as in a landscape by Soutine."

Soutine also greatly admired the affluent and educated Modigliani who, unlike Soutine, openly discussed his Jewishness with strangers. Known to compulsively proclaim “I am a Jew,” while introducing himself to artists in Montparnasse, Modigliani was already fluent in French when arriving in Paris. Soutine, on the other hand, belonged to a larger phenomenon of shtetl artists migrating to pursue their craft. In addition to the growing circle of Jewish artists, there was a surge of shtetl Jews leaving the Russian Empire for France as a result of the failed 1905 revolution.

But this early, almost mythical period in Soutine's career came to a swift end with the onset of war. The Russian artist Marevna recalls of that time, two years after the beginning of World War I, “life became very hard for foreigners, students and artists...all privileges were withdrawn for foreign artists as the war dragged on, in order to extend to French families” (Marevna Vorobëv, Life with the Painters of La Ruche [Athelhampton, Constable], 1972, 54). Immigrants seeking refuge in Paris were excluded from the World War I draft, yet the war provided a catalytic opportunity for immigrant artists. By pledging their loyalty to France, immigrants were able to speed up the process of assimilation as residents of France.

Almost no art by Soutine remains from the years following his arrival in Paris, between 1913 and 1915.

Soutine, who desired to prove himself, volunteered for the draft, only to be rejected due to health issues; instead, the artist enlisted in a work brigade digging trenches, but his deteriorated health did not allow for him to continue.

Almost no art by Soutine remains from the years following his arrival in Paris, between 1913 and 1915. The artist was famous for taking knives to his paintings. His future patron Madeline Castaing recounts Soutine’s destructive tendencies: “That evening, in bed, we heard Soutine open the door to his room, go past our door and up the stairs to the attic. My husband rushed out and I followed. ‘Soutine, stop!’ He had a bottle of petrol! ‘Soutine, it’s a masterpiece! It’s a crime!’ (Madeleine Castaing, “Memories of Soutine,” in Chaïm Soutine, 1893-1843 [London: Arts Council of Great Britain, 1982], 15-18).

A rare record from this period, L’Atelier de l’artiste à la Cité Falguière was selected as the opening work in several prestigious Soutine exhibitions, including the 1950-51 retrospective at the Museum of Modern Art in New York and the 1973 exhibition in the Musée de l'Orangerie in Paris. It was most recently on public view in the first gallery of the Soutine show “Flesh” at The Jewish Museum in New York in 2018, one of only two paintings that were not still lifes.

The pair of landscapes from the Lipman collection are remarkable records of a uniquely important place and time, not only for Soutine, but for his contemporaries and the subsequent generations who have drawn inspiration from the Montparnasse group; like so many of the original manuscripts and maps from the Lipman collection, these paintings document an extraordinary historical moment when revolution – both political and artistic – was in the air. 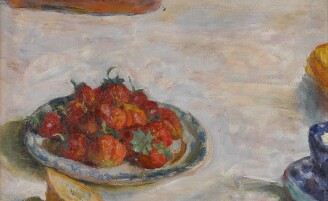 Learn More about the Collection of Barbara and Ira Lipman