F rom a distinguished private European collection, this group of seven lots represents a tantalising array of works on paper by some of the most celebrated artists of the twentieth century. Signifying the impeccable eye of a true connoisseur, they range from Surrealism to the British avant-garde and are demonstrative of an extraordinary appreciation and understanding of the power and beauty of modernist draughtsmanship.

The collection is led by Henry Moore’s remarkable 1942 work Two People Looking at a Sculpture. During the war, when Moore could not focus on sculpture, he became immersed in the pursuit of drawing, investigating new forms and subject matter that charted the themes that would come to define his later works.

The four works by Moore highlight the artist’s exceptional talent as a draughtsman; the artist considered the use of drawing as a tool to study natural forms, for the development of his sculpture and importantly as finished artworks in their own right.

Alexej von Jawlensky’s Abstrakter Kopf, meanwhile, is a vibrant product of German Expressionism, of which Jawlensky was a pioneer, alongside his friend Wassily Kandinsky. With the aim of liberating painting from figuration, Jawlensky and the Der Blaue Reiter group explored the effects of abstraction, resulting in a spiritual dimension on the canvas which harmoniously unites humanity and nature. Abstrakter Kopf is a highly accomplished expression of the impact of colour and line.

It is accompanied here by George Grosz’s Die Strasse, undoubtedly an example of the artist’s best drawings from the 1910s and reflective of the Neue Sachlichkeit, the German modern realist movement that came to fruition in the 1920s.

The collection also includes one of the most important masters of Bauhaus Modernism, Lyonel Feininger, who along with Kandinsky and Klee, managed the innovative art school that flourished in Germany during the short-lived Weimar Republic. Feininger’s Regatta, portrayed in prisms of luminous and nearly transparent colours, achieves a mixture of delicacy and monumentality, and is among the finest of the artist’s romantic, crystalline seascapes.

The diversity of the group reflects their collector’s artistic outlook, one that disregards geographical borders and holds quality and refinement in the highest esteem. Each was produced in the period for which the respective artist is most renowned.

They are joined by a 1935 gouache, watercolour and ink drawing entitled La Dormeuse by Joan Miró which encapsulates the artist’s angst-ridden imagination, sparked by the Spanish Civil War and will be offered in Sotheby’s Surrealist Sale on 26 February. 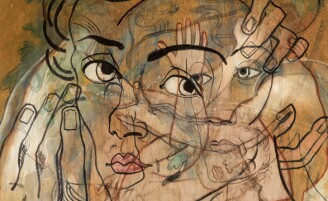