Treasure in the Attic: Tales of Incredible Discoveries

The vase was discovered by chance in the attic of a French family home and brought into the Paris office by its unsuspecting owners in a shoe box.

Over the years there have been a number of remarkable stories about people who’ve made startling discoveries in the least likely of places and we decided to take a look at a few to coincide with our online-only Attic Sale: Offered Without Reserve, which is open for bidding until 29 June...

In 1991 the first half of the original text of The Adventures of Huckleberry Finn, with handwritten notes by the author Mark Twain, was discovered in a trunk in a Los Angeles attic.

Paul Needham, who headed up the Sotheby’s books and manuscripts department at the time said of the discovery: "This is the most amazing survival imaginable so far as American literature is concerned. The only thing comparable to it I can think of would be an original Shakespeare manuscript."

Meanwhile, in 2006, Sotheby’s in New York sold Norman Rockwell’s Breaking Home Ties, which was discovered behind a false wall in a house in Vermont. The home was owned by the cartoonist Don Trachte Jr who bought it for $900 in 1960 and was only discovered by his sons after their father died. It sold for $15.4 million at auction, at the time a record for the artist.

Mark Stephen, Deputy Director in the London valuations department, who has 35 years’ experience in the auction world told us: “What the art trade loves are stories about discoveries, and the majority of these tales are in the area of Chinese ceramics and works of art. The tales of dealers bidding on Chinese lots in country sales and making fortunes are legion.  Some you need take with a pinch of salt, but a lot of fine Chinese ceramics have come to light in the last decade.

“The boom in the Chinese economy in the last twenty years has led to Chinese collectors buying back their heritage with dealers scouring British and European auction rooms for rare pieces.  What is incredible is the volume of Chinese ceramics in Britain and Western Europe generally.”

One such discovery – a pair of Doucai bowls and covers – recently came to Sotheby’s via the online valuation platform and sold for £68,750 in the Important Chinese Art sale in May.

Mark added: ”Anyone with a crystal ball and a bit of spare cash twenty to thirty years ago would have done very well investing in carved white Chinese jade and fine quality republican period porcelain.  This was totally disregarded then and very possibly there are good examples in family homes around Britain also disregarded and overlooked.”

MAIN IMAGE: AN ORMOLU AND BLACK AND WHITE MARBLE MANTEL TIMEPIECE, THOMAS WEEKS, LONDON, CIRCA 1820 FROM THE ATTIC SALE: OFFERED WITHOUT RESERVE (22–29 JUNE) 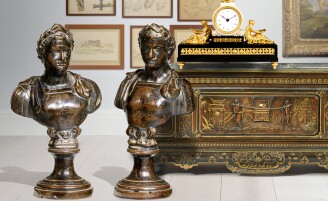