By Serena Sutcliffe, MW
Sotheby’s Hong Kong Autumn 2019 wine sale series is led by The Distinguished Cellar of A Pioneering Collector , a stunning single-owner sale that consists of over 1,100 lots. From this collection of magnificent wines, Serene Sutcliffe MW highlights her personal top ten selections.

Penfolds Grange 1998
The combination of Shiraz (97% here), 18 months in new American oak and excellent weather conditions make this one of the ‘greats’ – and you can pounce on it right now, in all its glorious complexity. This marriage of Shiraz and the strong taste of American oak really works, as the flavours are so complementary.

Dominus Estate 2012
Christian Moueix’s Bordeaux-style Napa beauty, showing Cabernet Sauvignon at its most refined in the region. A perfect growing season in 2012 enhanced the classy characteristics, elegance in liquid form. However, it is not Bordeaux, just a cousin, with some aromatic, even quite exotic notes. Drink it with a top Bordeaux if you want to explore the differences.

Harlan Estate 2012
This brilliant creation burst on to the Napa scene with the 1990 vintage and has shone ever since. This is Cabernet Sauvignon that is all polished, and poised, richness, capable of long ageing and benefiting from a winemaking and management team that is equally remarkable for its longevity.

Haut Brion 1998
This is a stunning vintage for Haut Brion, and Pessac-Léognan, and I would not wish for it to pass you by! Its silky, cigary fruit is totally beguiling and there is enormous depth and complexity to it. You are absolutely permitted to drink it now, but it will keep much longer if you can resist it – and think of your children!

Tertre Rôteboeuf 2008
François Mitjavile makes the most individual St. Emilion there is, from a sun-soaked slope and God-given talent. There is tremendous minerality here, with peaty backbone and coffee flavours, plus an utterly intriguing maturation pattern. Watch this one all the way.

La Tâche 2002
Every top Burgundian 2002 I drink at the moment exudes fragrance and refinement and I think it could possibly be their 'moment.' Obviously, La Tâche has that something extra. You could call it sheer class, but add in woodsmoke, cherries and plums and you would only be touching the surface. Drink it before the 1999, which is stupendous and a mite more powerful.

Clos de Tart 2009
One of the greatest wines made by Sylvain Pitiot and on its way to becoming a legend for its perfect composition, gorgeous red fruit and real depth and volume. A Monopoly Grand Cru in Morey-Saint-Denis in a fabulous vintage – who could ask for more.

Côte Rôtie La Mouline 2005
Often called the most ‘feminine’ of the three Guigal Côte Rôtie La La’s, probably because there is a certain silkiness to the wine due to the 11% Viognier tempering the Syrah – or, so they say. All I know is that this is a simply ravishing example, consistently pure, perfect and captivating – like a woman, in fact!

Bienvenues Bâtard Montrachet 2010, Leflaive
Amongst the jewels in the Leflaive crown, I have a particular ‘penchant’ for this Grand Cru and, when this is allied to the wonderfully fresh, defined 2010 vintage, everything falls into place. Vibrant and refined, taut and yet opening out splendidly, pour this into a big ballon glass and revel in it.

Bienvenues Bâtard Montrachet 2002, Vincent Girardin
I have enormous pleasure in drinking Girardin white wines (and the reds are moving up there too) and this is a peach – stylish and luscious AND just asking for you to pull the cork. 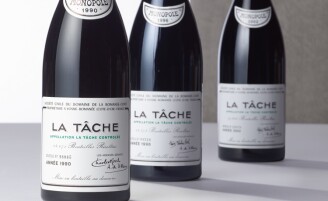 Past Auction
The Distinguished Cellar from A Pioneering Collector
5 October 2019 | 10:00 AM HKT | Hong Kong