S otheby’s Wine simultaneously opened the inaugural weeklong sale series A Life of Luxury and closed the 2017 auction year in grand fashion with a banner one-day auction of 1,036 lots totaling $2,628,941. The crown jewel of the Côte de Nuits, Romanée Conti, was the top lot of the day with three bottles of the 2013 vintage selling for $55,350. This hailed from the lead consignment, “DRC Spanning Four Decades, Rousseau in Historic Vintages, and Top-Flight Bordeaux,” which sold for $619,244 in just 78 lots versus pre-sale estimates of $383,300–537,700. Five of the top ten lots of the sale came from this impressive collection, including six bottles of Chambertin Domaine Armand Rousseau 2005 which achieved the record price of $24,600.

Sotheby’s Wine was thrilled to offer “An Extraordinary Collection Sold to Benefit The Fredric Roberts Foundation," which totaled $418,262 and whose proceeds will be directed towards the mission of The Fredric Roberts Photography Workshops, giving students a voice through photography.

Our last sale of the year will be in London on 13 December, and we have already begun accepting consignments for New York’s first sale of 2017 which will be on 24 February. 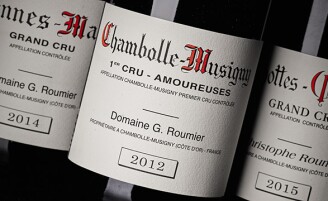