Three of a Kind: Mediterranean Scenes

Works by some of the most important European painters will be offered in the upcoming 19th Century European Paintings auction on 24 May. Ahead of the sale, we look at three works at different price points that transport the viewer to blue-skied Mediterranean climes, through evocative, expressive brushstrokes and a vibrant use of colour.

Painted in September 1919, this luminous view depicts a rocky cove in Ibiza, with the island of Formentera just visible on the horizon. Following the completion of the vast decorative scheme for Archer M. Huntington's Hispanic Society of America, New York, which had taken the artist seven years to complete, Sorolla felt physically and emotionally exhausted. He therefore decided to spend the summer relaxing in Mallorca, accompanied by his family, from where he travelled on to neighbouring Ibiza which inspired a series of works including the present one, made on the spot.

This sweeping view epitomises del Campo’s approach to vedutismo, a popular genre pioneered in the eighteenth-century by Francesco Guardi and Canaletto, which gained increasing popularity in the nineteenth century. Painted from the promenade overlooking the lagoon and encompassing the Doge's Palace, the entrance to St Mark's Square, and the Church of Santa Maria della Salute, the panorama is striking in its technical precision, lively brushwork and luminous palette.

The young del Campo was lured to Italy not only by its picturesqueness but by the hope of launching a successful and lucrative career. In moving to Venice in the late 1880s, he joined an already large community of emigré artists, among them Antoinetta Brandeis and the Spanish colony of painters who included Rafael Senet, Mariano Fortuny, and Martin Rico, all of whom found a ready international market for their views of the city.

Painted in 1896, Oleanders in Bloom, Capri, is Krøyer’s love letter to the Amalfi coast: its architecture, flora, and above all its light. Set against an ultramarine sky, the crimson exuberance of a mature oleander tree dominates the scene in a firework-like burst of flowers. Dating from three years after the artist’s 'blue period' masterpiece, Summer Evening on Skagen’s South Beach, the present work represents a culmination of Krøyer’s Impressionistic ambitions in free use of colour and assured brushwork.

"It is full speed ahead with work in sunlight and getting the brightness down. This summer I really wanted to get into light and sun. I have already covered a number of canvases and panels." 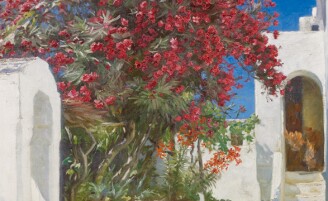