The World's Most Expensive Whisky

This autumn, Sotheby’s New York will offer The Macallan, 1926, 60 Years Old, Sir Peter Blake, with an estimate of $700,000–1,200,000, the highest estimate ever placed on a bottle of wine or whisky. After being aged in sherry casks for six decades, just 40 bottles of The Macallan 1926 were bottled, representing the oldest Macallan vintage ever produced. Of the 40, twelve were labeled and signed with an exclusive design by British artist Peter Blake, with an additional twelve by Italian artist Valerio Adami. British Pop artist Sir Peter Blake RA is perhaps best known for designing the cover for the Beatles' Sgt. Pepper's Lonely Hearts Club Band as well as album covers for the likes of Band Aid, Eric Clapton, The Who and Oasis.

The Most Valuable Bottle of Whisky Ever Offered at Auction

The 40 Macallan bottles were reportedly not made available for purchase, but instead given to Macallan’s top clients. In addition to the bottles that were likely consumed, at least one bottle was destroyed in an earthquake in Japan, adding to the rarity of this collectible. The Peter Blake bottle being offered at Sotheby’s this autumn is numbered 9 of 12.

Recently, auction interest in the world’s finest whiskies has surged. In 2017, the top three prices at Sotheby’s Wine across both auction and retail were for whiskies, with the spirit taking four spots on last year’s top ten and Macallan coming first and second on the list, with both selling for prices in excess of $450,000. 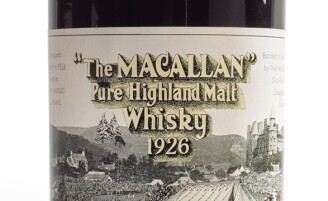 In April 2017, Sotheby’s set a world record for a single lot of whisky at auction with the sale of The Macallan in Lalique – The Legacy Collection, which achieved HK$7,717,500 / US$989,423 for charity. The lot contained single malts aged from 50 to 65 years housed in a unique cabinet by French glassmaker Lalique. In addition, The Macallan 64-Year-Old in Lalique: Cire Perdue sold for $460,000 was sold at Sotheby’s in 2012 for US$460,000, with the proceeds benefiting charity : water.