“I am just going outside and may be some time”. These were the last words of the Antarctic explorer Captain Lawrence Edward Grace "Titus" Oates (1880–1912). He uttered them prior to walking into a blizzard and certain death. Why would he do such a thing?

Oates was a member of Robert Falcon Scott’s ill-fated Terra Nova Expedition to the South Pole between 1910 and 1913. He was selected primarily due to his strength and military experience, and was put in charge of the 19 ponies that were brought along. The Terra Nova sailed from Cardiff, Wales, on 15 June 1910, and made it to Ross Island on 4 January 1911.

Oates, Scott and 14 other people left Cape Evans on 1 November 1911 in the pursuit of being the first to the pole. During the trip many men were sent back to base camp until only Oates, Scott, Edward A. Wilson, Henry R. Bowers and Edgar Evans remained to complete the gruelling trip. Oates did not appear to have a fondness for Scott, as he expressed: "Myself, I dislike Scott intensely and would chuck the whole thing if it was not that we are a British expedition and must beat those Norwegians… [Scott] is not straight, it is himself first, the rest nowhere.”

The small party was victorious and reached the pole on 17 January 1912. Alas, the victory was short lived when the men discovered a tent and note from the Norwegian Roald Amundsen, who informed that that he and his party had made it to the pole on 14 December 1911 – thus beating the British team by a mere 34 days.

The return journey proved to be extremely strenuous and difficult, due to weather conditions, lack of food, scurvy and frostbite. Edgar Evans was the first to die, while Oates had become severely frostbitten and weak. He had become: “in Scott's words, ‘a terrible hindrance’ to the others...” At lunch on 15 March Oates proposed that the others should leave him behind in his sleeping-bag, but they persuaded him to go on. He woke next morning, 16 March 1912, and according to Scott: “It was blowing a blizzard; he said I am just going outside and may be some time. He went out into the blizzard and we have not seen him since… We knew that poor Oates was walking to his death but though we tried to dissuade him we knew it was the act of a brave man and an English gentleman.”(ONDB). Sadly this made no difference for the remaining Scott, Wilson and Bowers, who died shortly after.

A fine collection of memorabilia and ephemera on world exploration and travel will be offered at auction in London on 26 September 2017 in The Library of John and Suzanne Bonham. 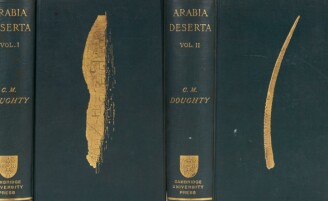