This magnificent dish, a Piatto da Pompa, was painted in the district of Urbino, probably in the Fontana workshop, in the mid-16th century. The Fontana workshop received notoriety and commissions from the Italian and European Nobility and was renowned for istoriato wares.

Because of the success the factory enjoyed from its Princely commissions, which were usually painted with armorials, it arguably attracted the best maiolica painters in the region. It has yet to be discovered which battle this impressive dish depicts, though its inscription suggests it may be an episode from the Roman civil wars, 'Del[le] [tr]ombe al gran suon se stessi occidono', [To the sound of the trumpets they kill themselves]. Its large size, 46cm., 18in. diameter, suggests that it was probably displayed in a similar manner to a silver buffet, as seen in the contemporary frescos of Andrea Boscoli’s Convivio degli dei and Luca Longhi’s Nozze di Cana, though no contemporary depiction of maiolica in such a display is known to exist.

The dish leads an exceptional private collection of Italian maiolica which will be offered for sale in London in Treasures, 5th July and the Old Master Sculpture & Works of Art, 6th July. The collection of 16th century maiolica is formed of both istoriato wares and pharmacy vessels.

During the Italian Renaissance pharmacies were fitted out with exceptionally lavish ceramics. These brightly painted vessels were typically ordered in large numbers and would be arranged in rows filling the room creating a dazzling array of colour in an otherwise dimly lit room. Each was painted with label to show its contents and those not fitted with spouts typically had a flaring lip which would be covered with cloth or parchment to keep their original contents from drying out.

THE DOCTOR'S DISPENSARY AND THE APOTHECARY'S SHOP, 17TH CENTURY.

The Apothecary, or Speziale, dealt in remedies and would mix herbs to produce ointments, unguenti and syrups, sciroppi. The clientele usually covered every social class who purchased herbs and spices for their own remedies. Some products were prepared in situ and were purchased for their healing qualities, or so it was believed. This ‘wet-drug’ or syrup-jar originally stored 'Oxizaccara', or Oxysacchara; oxysaccharum which was produced by evaporating a mixture of sugar and vinegar, sometimes with the addition of pomegranate juice to a syrupy consistency.

Though principally a supplier of medicines, it was not uncommon for these establishments to also sell ointments, oils, pomades, candles, potpourri, sugar and spices, candles, sweets, and other condiments. This impressively large albarello painted in the 1560s is labeled with Mostarda which was a sweet tangy preparation of fruits, combined with mustard and honey or sugar. The surviving jars labelled for ‘Mostarda’ mostly appear to be of this larger form suggesting that it was consumed in large quantities. The collection features three labelled jars from the mid-16th century produced in the maiolica production centers of Castelli, Venice and the Duchy of Urbino.

To look at these objects, nearly half a millennium after their final firing, you are first drawn to their dramatic colour, un-faded by time and as vibrant as they were in the 16th century.  Then you are drawn to their tactility, theses objects were produced to be both admired and to serve a function, handling them gives you an impression of what daily life was like in Renaissance Italy. 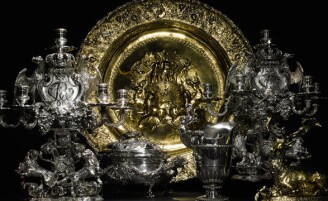 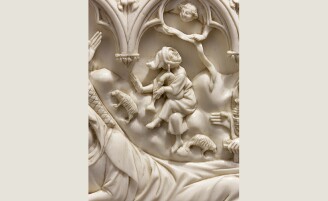