By Sotheby's
A towering economist and political philosopher, Friedrich August von Hayek (1899–1992) is often regarded as one of the greatest intellectual figures of the twentieth century. In March his private possessions, from his Nobel Prize and Presidential Medal of Freedom, to his typewriter, writing desk, and annotated version of Adam Smith’s The Wealth of Nations went on sale in a dedicated online auction, offering an unprecedented look at the life of this extraordinary genius.

A new record for any item sold in an online-only sale at Sotheby’s was set when von Hayek’s Nobel Memorial Prize for Economic Science sold for £1.1 million, almost triple its pre-sale low estimate (£400,000–600,000). Von Hayek’s Nobel Prize, awarded for “pioneering work in the theory of money and economic fluctuations”, led Sotheby’s online-only sale of 27 lots from his personal collection which together realised £2.04 million, quadruple the pre-sale estimate (£445,000–670,000).

The auction was a ‘White Glove” sale, with each and every lot selling for many multiples of their high estimate, including a collection of “Desktop ephemera”, estimated at just £200–300, that reached £87,500.

Hayek’s explanation of the relationship between market forces and personal freedom, among his other theories, had a profound impact on the shaping of the modern world. From the collapse of the Soviet Union, and the governments of Margaret Thatcher and Ronald Reagan, Hayek’s theories influenced some of the major political moments in Western history. In more recent years, his conflicting views with rival economist John Maynard Keynes about how to conquer the Great Depression were brought into sharp focus following the economic crash of 2008.

The civilisation of Hayek’s childhood disintegrated with World War One and his youth was inevitably marked by service in the artillery in the brutal Mountain War on the Italian Front. In later years Hayek preferred to recall these years by telling of his hapless attempt to deliver a transport of live eels to the front, but he also acknowledged how the war profoundly shaped his outlook and his resulting theories. Hayek first made his name on economic issues, only expanding his intellectual horizon to expound on the wider political and philosophical implications of his free market economics in the 1940s, a turn most publicly marked by the publication of The Road to Serfdom (1944).

He was awarded the Nobel Memorial Prize for Economic Science in 1974 for his “pioneering work in the theory of money and economic fluctuations and for [...] penetrating analysis of the interdependence of economic, social and institutional phenomena.” While his contribution to the field of economics itself was exceptional, what set Hayek apart was his use of the insights he gained from the study of markets to underpin a wider political philosophy that had an influence which is perhaps still unmatched by any other Economics laureate.

Should you wish to discuss a complimentary and confidential valuation of works from your collection, please contact paige.thompson@sothebys.com or call +44(0)20 7293 6182. 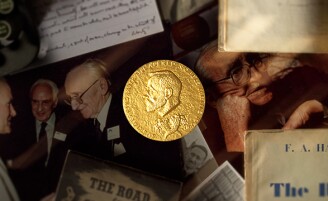