The Nobel Peace Prize to Honor a New Era of Understanding

T he Nobel Peace Prize was created to honor the best among us, that person or persons who devote their lives for the betterment of all humanity. Martin Luther King Jr., Nelson Mandela, Mother Teresa, Elie Weisel – these great names are just a few of the only 99 to have been selected to be the Nobel Laureates and awarded with the iconic gold Nobel Prize Medal, engraved with their name, a cash award in the amount of 7 million Kronor, and a special diploma.

But even when considering the Nobel Peace Prize's prolific history, 1946 was a particularly important year for the award. For the past seven years, there had been no recipient of the prize – under the German occupation of Norway, regular political activity was banned, and the Nobel Prize Committee was forced to postpone its annual awards indefinitely.

In 1946, the first year of peace after nearly a decade of unrest around the world, it was finally time to choose a new Nobel Peace Prize recipient. The Committee reviewed the previous 50 years, considering candidates including President Herbert Hoover, l'Union des Associations pour la Société des Nations (The International Federation of League of Nations Societies) and The Permanent International Peace Bureau.

In the end, they chose a man for "His Creation of a Peace-Promoting Religious Brotherhood Across National Boundaries": John R. Mott, YMCA Leader and tireless activist for interfaith understanding and reconciliation.

Mott's qualifications for the award are seemingly endless. As one of the most influential Protestant leaders of the late 19th and early 20th centuries, Mott spent his life advocating for mutual respect and understanding among people of different faiths. This included crossing borders during World War I to lead relief efforts for prisoners of war and soldiers, serving as representative of President Wilson's peace commissions to Mexico in 1916 and Russia in 1917 and heading the World Alliance of YMCAs as general-secretary. Mott's mission was to make it routine for people to work together, regardless of nationality, religion, or race.

Despite all these accomplishments, Mott remained humble – so much so that, when he and a colleague were offered free passage across the Atlantic on a glamorous new ship named the Titanic, Mott opted instead to book passage on a more modest ocean liner. The choice saved his life. "The Good Lord must have more work for us to do," remarked Mott on his good fortune.

"The Good Lord must have more work for us to do."

Mott's Nobel Peace PrizeMedal, struck in solid 23-carat gold, designed by Gustav Vigeland and manufactured by the Royal Norwegian Mint (Det Norske Myntverket) in Kongsberg, Norway, is the top lot in Sotheby's Fine Books and Manuscripts Online auction. It is only the fifth Nobel Peace Prize ever offered at auction, making this sale even more significant.

Bidding is now open, and continues online until 21 June. 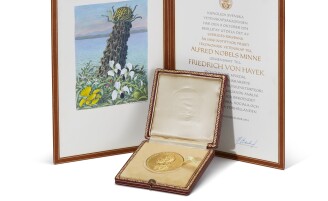