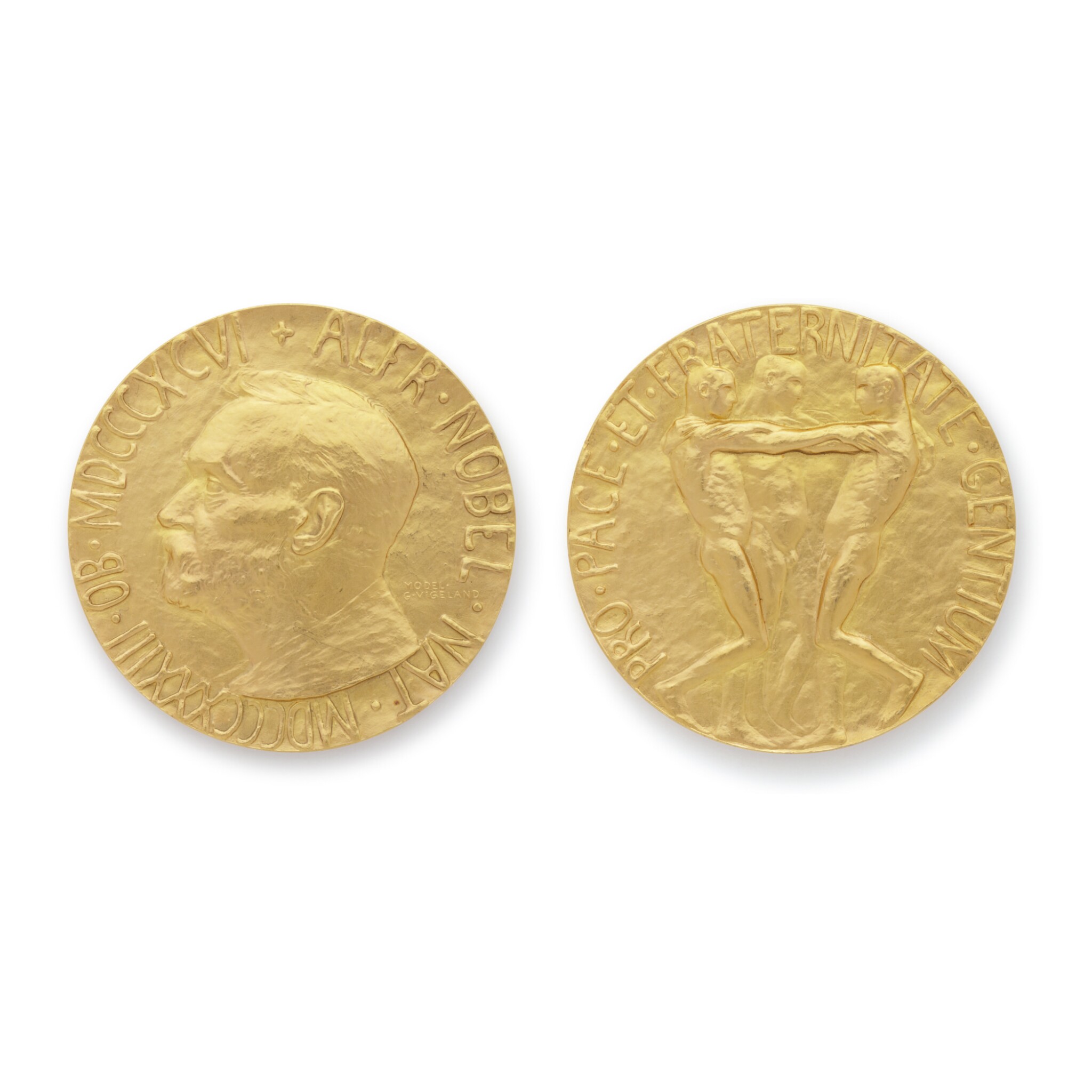 Nobel Peace Prize Medal Awarded in 1946 to YMCA Leader John R. Mott (1865-1955) for “His Creation of a Peace-Promoting Religious Brotherhood Across National Boundaries.”

In 1946, in the aftermath of World War II, the Nobel Committee looked back over the previous 50 years for leaders who had devoted their entire lives to promoting peace in the world. The prize had not been awarded since 1939, and they selected John R. Mott, for his lifetime contributions to the creation of a peace-promoting religious brotherhood across national boundaries, along with pacifist leader Emily Greene Balch, for her lifelong work for disarmament and peace. Other nominees that year included President Herbert Hoover, l'Union des Associations pour la Société des Nations (The International Federation of League of Nations Societies), The Permanent International Peace Bureau, l'Union Belge pour la Société des Nations, Richard von Coudenhove-Kalergi (founding president of the Paneuropean Union), and Alexandra Mikhailovna Kollontay (Soviet revolutionary and diplomat) to name a few.

One of the most influential Protestant figures of the late 19th and early 20th centuries, Mott was the long-serving leader of the Young Men’s Christian Association (YMCA), and worked to establish understanding and reconciliation among religions. He was a pioneer in the struggle against racial discrimination and for mutual respect and understanding among people of different faiths, a critic of the oppression of colonized peoples, and took part in both World Wars in relief work for prisoners of war. A founder of the Christian Ecumenical movement, he devoted his life to missionary activities and ecumenical work. His best-known book, The Evangelization of the World in this Generation became a missionary slogan during the first half of the 20th century.

As general-secretary of the World Alliance of YMCAs, and creator of the forerunners of the World Council of Churches, Mott’s mission was “making it routine for people to work together” for international, interfaith, and interracial understanding and reconciliation. He concentrated heavily on developing young people as future leaders of their nations and of international collaboration. During World War I, he earned the trust of nations on both sides, frequently crossing borders to lead massive relief efforts for all prisoners of war as well as soldiers on the front-lines. He served as the General Secretary of the World Christian Student Federation from 1895 until 1920, and was elected lifelong honorary president of the World Council of Churches.

Mott was also a counselor of international affairs during Woodrow Wilson’s presidency, serving on President Wilson’s peace commissions to Mexico (1916) and Russia (1917), and was awarded the American Distinguished Service medal for his diplomacy. His papers are held at the Yale Divinity School library, and he has been honored with a feast day on the liturgical calendar of the Episcopal Church (October 3rd). He traveled around the world for his work, and crossed the Atlantic more than 100 times. In what some might consider an act of divine providence, when Mott and a colleague were offered free passage on the White Star Lines glamorous new ship The Titanic, Mott chose instead to book passage on the more humble SS Lapland. He was later quoted as saying "The Good Lord must have more work for us to do."

The Nobel Prize is widely considered to be the most prestigious award conferred in the fields of Medicine, Physics, Chemistry, Literature, and Peace, with the most famous of these being the Peace prize. According to Alfred Nobel’s will, the Peace Prize was awarded to “…the person who shall have done the most or the best work for fraternity between nations, the abolition or reduction of standing armies and for the holding and promotion of peace congresses.” It has only been awarded 99 times since the establishment of the prizes in 1895, compared to other categories such as Physics, which has been awarded 112 times thus far. Some of the best-known Peace Prize laureates include Martin Luther King Jr., Nelson Mandela, Mother Teresa, the 14th Dalai Lama, Elie Weisel, and Malala Yousafzai.

By descent from the recipient