The Meyers Manx: the Dune Buggy that Enchanted the World

A s a Southern California native, Bruce Meyers grew up in the midst of the early days of surfing, drag racing and hanging out at the beach. Pismo Beach introduced Bruce to the dune buggy – albeit a very different type than the lightweight style we think of today. The early dune buggies were referred to as “water pumpers” and were crude, heavy backyard creations based off of full-size sedan and pickup truck chassis, generally incorporating a V8 engine mounted toward the middle of the chassis with a pair of seats mounted over the rear axle. Bruce took it upon himself to improve upon the design, modifying a VW Kombi bus with wide wheels and dubbed “Little Red Riding Bus." Shortly thereafter, Bruce incorporated his boat building experience to construct the first fiberglass bodied dune buggy, and thus the Meyers Manx was born.

The Meyers Manx took the world by storm, appearing on the covers of Hot Rod magazine and Car & Driver. The Manx proved to be lightweight, and fun and extremely capable-especially off road. The Manx even found itself successful in competition, winning its class in the 1966 Pikes Peak hill climb, eclipsing the Tijuana to La Paz motorcycle record by over five hours and taking first and second place in their class at the first official race, the Mexico 1000 in 1967. Over the years the list of victories for the buggy in off road competition began to grow, as did a pop-culture following bolstered by a starring role in films such as Steve McQueen’s The Thomas Crown Affair.

Offered here through RM Sotheby’s Online Only auction platform is an early example of Bruce Meyers’s creation, thoroughly restored to impeccable condition. Scroll down to explore the highlights of the nimble and capable Meyers Manx.

The Manx on offer is believed to be one of the first few hundred pre-serial number examples produced in 1968. A plaque mounted on the dashboard from the Meyers Manx Registry, as well as a Certificate of Authenticity signed by Bruce Meyers verify its heritage as a true Meyers Manx.

A recent and thorough, no-expense-spared frame off restoration was conducted by a Volkswagen and Porsche specialist in North Carolina. It was finished in its original color of orange with glimmering Big Daddy Roth paint. A number of new factory exterior components were utilized including the windshield, front bumper, stainless steel roll bar and Meyers Manx license-plate frame.

The front disk brakes and rear drum brakes provide ample power to bring the lightweight Manx to a halt, whether on the highway or while conquering the dunes. It is noted on the mechanical inspection report that during the test drive the brakes performed flawlessly, with no pull to either side while being engaged.

The Manx is powered by a 1,914 cc horizontally opposed four-cylinder engine equipped with a progressive two-barrel carburetor, and featuring an electronic distributor professionally built by PowerHaus in Torrance, California. In July of 2018, they began with a new, zero-mile long block and bored the engine case to accommodate 94mm cylinders and employed all new components to assemble the completed engine, capable of 100 horsepower. A polished ceramic coated Stinger exhaust adds a distinctive exhaust note and matches the chrome accents nicely.

The engine is paired to a lightened 200mm flywheel and four speed manual transmission with an EMPI short-throw shifter for direct and enjoyable driving. The power is driven to the rear wheels through rugged Rancho Pro-street axles.

An Exciting Opportunity to Own An American Icon:

The Meyers Manx embodies the fun-loving spirit of the late 60s West Coast automotive culture. This example has left no nut or bolt untouched and is certain to bring a smile and entice those of all ages with its charm and character, whether displayed at vintage car events or enjoyed to its fullest both on and off road. 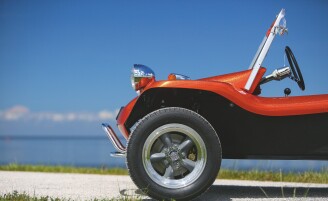