T he form of this extraordinary table was invented by Theodore Alexander Robert Jupe, upholder of 47 Welbeck Street, Cavendish Square, who applied for a patent for a circular extending dining table with segmented top (no. 6788) in March 1835. The description for the patent stated:

"An improved expanding table so constructed that the sections composing its surface may be caused to diverge from a common centre and that the spaces caused thereby may be filled up by inserting leaves or filling pieces."

The design typifies the spirit of the age. England was in the grip of the Industrial Revolution and the machine was king. Engineered to perfection, the result of the complex mechanism is a wonderfully elegant table that is simple to use. Expanding with ease from its smallest size (160cm. diameter) to its largest (229cm. diameter) in a blink, the table increases from six seats to twelve.

The radial top – fashioned from two enormous planks of figured mahogany – rests on a spiral Capstan mechanism which ingeniously transforms rotary motion in to linear movement. The additional leaves are conveniently stored in a fitted cased, also bearing the maker’s stamp.

The first tables of this type were produced by Jupe in association with the cabinet-maker John Johnstone of New Bond Street and carry a brass bosse to the central mechanism engraved 'JUPES PATENT'. After 1842 the firm changed its name due to a new partnership and became Johnstone & Jeanes.

The firm went on to achieve international fame, exhibiting a ‘circular table…made on the expanding principle’ at the Great Exhibition of 1851. The offered table – by Johnstone & Jeanes – was acquired by Sir Hew Hamilton-Dalrymple of North Berwick, 6th Baronet (1814-1887), for the Dining Room at Leuchie House, North Berwick, East Lothian, and has descended directly from the family.

If you look closely, you can just about make out a paw foot in the wonderfully atmospheric black and white photograph of the Dining Room dating to the late 19th century. Several examples, as well as a detail of the mechanism, illustrate the remarkable consistence of their workshop and are reproduced in C. Gilbert, Pictorial Dictionary of Marked London Furniture 1700-1840, Leeds, 1996, pp. 283-285. 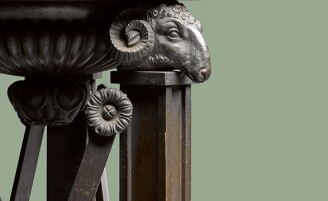