The Magnificent Merlot of Masseto

NEW YORK – For any wine geeks out there who have enjoyed the film Sideways, it is with satisfaction that we catch the humorous error when Paul Giamatti’s character gruffly rails with derision against drinking merlot, only to sip his most treasured bottle, a 1961 Ch. Cheval Blanc, out of a paper cup in a fast food restaurant. Ironically, this wine contains a significant percentage of the dreaded merlot. In fact, after the movie came out, sales of merlot experienced a noticeable downturn, and a collective shift in the perceived indignity of merlot came to be. While perhaps some domestic examples of the grape deserved this cooling effect, the great stalwarts of the Right Bank of Bordeaux – Petrus, Cheval Blanc, Trotanoy, L’Evangile, Conseillante and more – remained supremely desirable. It is widely acknowledged that the quintessence of merlot’s capability is expressed in the sandy, rocky and clay soils of places like Pomerol and St. Emilion. However, since its debut in 1986, with increasingly deserved renown built through vintages in the 1990s and cemented by many future legends created in the 2000s and early 2010s, there is another truly world-class merlot – but this one comes from Italy.

A SELECTION OF MASSETO BOTTLES ON OFFER THIS MARCH.

Masseto, the great Super Tuscan born out of a small patch of ideally-suited sandy clay soils in the Bolghieri region, owned and operated by the same Frescobaldi family that owns Ornellaia, is this regal Italian merlot. A single hillside vineyard of roughly 7 hectares, which is harvested and vinified into many different subplots after a rigorous double selection, and hand-picked only after an entire season of the most loving and meticulous attention to the vines’ progress, Masseto has gained a unique place in the pantheon of collectible wines. Perhaps it is the relative scarcity of production, rigor of the selection process of base wines which are deemed worthy of inclusion in the final blend, or the distinct terroir which is so well-suited to coaxing out the velvety lushness and enduring structural solidity that only the best examples of merlot possess. More likely, it is a combination of this and myriad other factors which have solidified Masseto as one of the most valuable, coveted wines in all of Italy and beyond.

In the upcoming 25 March New York wine sale, A Monumental Collection, From the Cellars of a Connoisseur: Part I, the sheer variety of vintage, size format and astounding quantity of Masseto is impossible to ignore, especially when considering the impeccable provenance, rarity, original wooden cases and ideal storage conditions of these wines' purchase upon release:

We invite you to peruse this incredible selection of wines on offer! 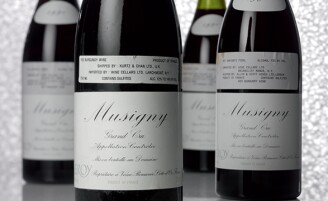