The Life of a Nobleman's Travelling Turban Stand

C ary Grant sauntered onto Pan-Am flights with his bespoke leather tote. George Clooney favours a Tumi carry-on. And Brad Pitt relies on Louis Vuitton to keep his threads sharp on location. If manners maketh man, it takes a perfect piece of luggage to maintain him.

It was ever such. As illustrated by a sartorial item offered in Sotheby’s Arts of the Islamic World sale on 1 May, a distinguished Ottoman wayfarer could come socially undone without his compact and bijou portable turban stand.

“Turbans were key in establishing social groupings in Ottoman court scenes and, through their place in literature, appear to hold an authority and grandeur of their own,” explains Alexandra Roy, Sotheby’s specialist in Islamic Art. “It can thus be deduced that a turban indicating high rank would enjoy storage and display of the calibre witnessed in the present lot.”

The lot in question is a masterpiece of 18th-century Turkey craftsmanship: a domed cylindrical form wooden stand, painted in red with gilt arabesques on its lower section and set on a pentagonal base inscribed with cursive calligraphy. This is not a disposable travel hanger.

The stand is housed in an ornate octagonal wooden case, inlaid with mother-of-pearl, tortoiseshell and ivory, detailing symmetrical floral designs and interlocking geometric motifs. Even its interior is dashing, decked out in a handsome green cloth.

Most surviving turban stands are bracketed wall pieces. A moveable feast of decoration such as this is extremely rare. As uncommon as its owner (both past and future, one imagines). “You probably wouldn't wear a turban of the quality held by this stand if you were not a nobleman,” Roy explains. “It's very unlikely that this was owned by a poor wandering dervish.”

The stand would have held the turban winding and its silk finial cap – the scaffolding around which the material was bound – providing a haven for the former and keeping the shape of the latter. This combination can be seen in a 16th-century portrait of Suleyman the Magnificent, another highlight of the sale.

The swooning inscription on the stand’s base reads: “destar gibi başım üstünde yerin var” (“Like the turban, your place is on top of my head”). The sentiment, by the Turkish poet Mahtumi Vahidi (otherwise known simply as mahtumi), reflects the many romantic notions that have been attached to turbans across the ages.

This turban stand highlights the Ottoman flair for combining beautiful design, delicate calligraphy, spiritual allusions and a dash of ardor. And all in a practical object aimed at keeping one presentable. But then, as Cary Grant observed: “It takes 500 small details to add up to one favourable impression.” 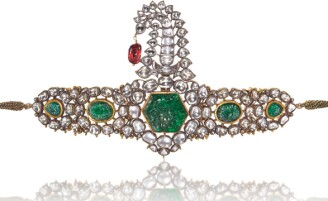