The Hype is Real: Bid on 100 of the Rarest Sneakers Ever Produced

By Halina Loft
Update: Sotheby's and Stadium Goods are pleased to announce that as of 17 July, all but one of the lots in Stadium Goods: The Ultimate Sneaker Collection Online have been acquired through a private sale. One lot remains: the 1972 Nike 'Moon Shoe'. Bidding will remain open until 23 July, as will the public exhibition at Sotheby's New York. 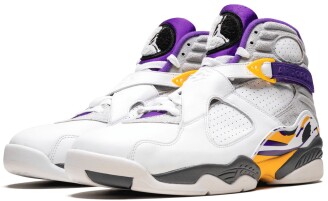 Online Auctions
From 100 to 1: Collector Acquires Majority of the Ultimate Sneaker Collection

C alling all sneakerheads: Sotheby's, in partnership with Stadium Goods, has a surprise for you. From now until 23 July, we're pleased to present Stadium Goods: The Ultimate Sneaker Collection Online. This auction includes some of the rarest, most coveted sneakers ever produced by the biggest names in the industry. You can place your bid now – or, stop by Sotheby's New York offices to view the public exhibition (and see these wearable works of art for yourself).

The auction's crown jewel is undoubtedly the pair of handmade Nike 'Moon Shoe' circa 1972, designed by Nike co-founder and Oregon University track coach Bill Bowerman. This is a significant artifact in Nike's history: created for the 1972 Olympic Trials, this shoe is one of only 12 produced – today, it's one of only a handful known to exist. Bowerman drew inspiration for the shoe's signature waffle sole traction from his wife's waffle iron; he made the very first prototype by pouring rubber directly into the iron's crosshatch mold. But here's the real X factor: this is the only unworn pair of Nike 'Moon Shoes' known to exist. It almost makes you want to set a new record time for the mile, but we understand if you'd rather stay seated.

Other gems from the sale are two pairs of Nike Mag sneakers, from 2011 and 2016, inspired by Marty McFly's kicks in Back to the Future Part II. Both pairs were part of limited releases, originally sold to benefit the Michael J. Fox Foundation for Parkinson's Research. The pair of 2011 Nike Mags are one of just 1,500 pairs made, and feature a futuristic light-up strap, heel and midsole. The 2016 model is even more rare: one of just 89 pairs produced, the updated model is also self-lacing, just like McFly's.

And for those seeking the most sought-after collection in recent years, there's the Travis Scott x Air Jordan 4 'Friends & Family Collection,' featuring five rare pairs of sneakers designed by the multi-platinum rapper himself. Four of the five pairs are unreleased versions of Scott's Air Jordan 4 "Cactus Jack" design; the fifth pair is the original retail version.

Sotheby's is pleased to collaborate with Stadium Goods on this exclusive sale. Founded in 2015, Stadium Goods is the world’s premier marketplace for coveted footwear. Unique to Stadium Goods is the “Trophy Case,” the greatest public collection of rare sneakers anywhere, a selection of items that have attained “grail” status, the rarest of the rare. From designs by leading fine artists and musicians to genre defining and genre-disrupting collaborations from the greatest athletes of all time, this is the ultimate sneaker collection, presented in the first ever auction of its kind. 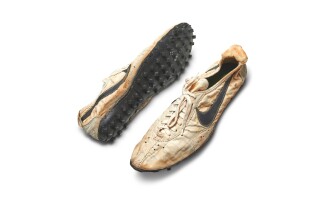