M odern life is often characterised by industry and technology — days in front of the computer, nights in front of the TV, rushed journeys, texting, phoning, e-mailing. More than ever, perhaps, Corot’s landscapes resonate with us as we seek an escape from the city and a return to our roots.

Paris in the 1840s was a city of turmoil with an ever-growing population of over 600,000 who, in 1848, overthrew King Louis-Philippe in a bloody revolution, to found the Second Republic. Fresh air and quiet peace was the last thing to be found in Paris in those days; the construction of the first French railway lines in the 1840s proved popular for previously unimaginable day-trips to the countryside.

The paintings Corot made in Barbizon form the foundation of his fame, but the village and the forest of Fontainebleau soon became so crowded with tourists that it quickly turned into a busy playground, quite unlike the vistas depicted by the early Barbizon artists. Corot was in search of real wilderness when he went to Brittany, la France profonde, which was not connected to the railway system until the 1860s.

The path leading into the picture is the only sign of human presence in this otherwise untouched woodland. It is a refuge into times gone by, the composition harking back to the classical landscapes of Claude Lorrain, Nicholas Poussin and Meindert Hobbema. A mother with her two children sits in the shadow of the trees by a small stream of clear silver water. While she beholds her youngest, the other child gazes after a man, maybe her father, riding into the distance towards the clearing. It is primarily the woman’s bonnet (a motif revisited by Gauguin forty years later), which situates the scene in Brittany.

For all its nostalgia, Paysage breton is not entirely untouched by advancements of the modern world, its vertical format and cropped composition were very likely influenced by the advent of photography in the 1840s. Could the birch-lined avenue be a path both into the past and into the future? 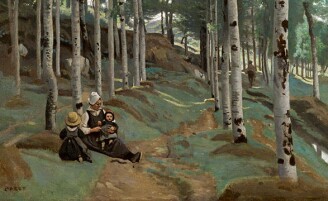