The First Japanese Map of the Buddhist World

T he author, Rōkashi 浪華子 (1654-1728), was a scholar-priest and the founder of the Kegonji Temple in Kyoto. His woodblock map was revolutionary in being the first printed Oriental map to introduce detailed Western cartographic information into the traditional Buddhist cosmological view and to attempt to merge the two together into a comprehensible form. It will be offred for sale inthe Travel, Atlases, Maps and Natural History sale at Sotheby's in London on 14 November.

In the centre of the continent the scared Lake Anavatapta appears, represented by four animal faces in a whirlpool formation. The lake is said to give rise to the rivers Ganges, Indus, Oxus and Tarim. These rivers flow respectively eastward, southward, westward and northward, nurturing the four corners of the world. According to Buddhist cosmology the lake lies in the centre of the world. Anavatapta means 'heat-free' and refers to its famed ability to soothe the fires that can plague beings. It is often identified as Lake Mansarovar in Tibet.

The shape of the map echoes that of Jambudvipa (the earthly world ordinary beings occupy). It is one of four islands in the seven seas that surround the centre of the universe - the sacred mountain Meru. The island of Jambudvipa has a triangular shape, much like the woodblock map.

According to Toshikazu Kaida, only five copies have been recorded, including one copy at the East Asia Library, University of Washington, and two copies that have come on the market in the past five years. The popularity of the map is evidenced by the fact that it was reissued unchanged in numerous editions until about 1815, and spawned innumerable copies and derivatives over the next 150 years. 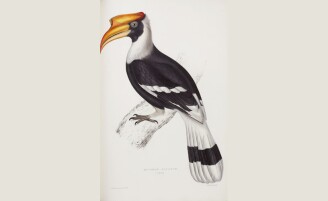