H aving been in business since 1978, New York gallerist Barbara Mathes has had time to think about her role in a dramatically evolving art market ecosystem. She characterises it with a metaphor you might not expect. “I’m an editor,” she says.

The lengthy roster of modern and contemporary masters that is the result ranges from Alexander Calder and Lucio Fontana to Yayoi Kusama and Joan Mitchell. She says that she likes “work that meets my criteria as both an art dealer and an art historian”.

“I want to be challenged and excited, then hopefully I can make you feel it, too”

Mathes is proud to have introduced the Italian sculptor and ceramicist Fausto Melotti (1901–86) to American audiences. She detects a distinct lyricism in his work, and saw an unexpected opportunity to show him alongside Calder in a 2007 exhibition. “Both trained as architects and both draw in space,” she says of the artists, who knew of each other’s work. “Those are the kinds of synergies that I like to present.”

Even when she shows work by artists of the stature of Carl Andre, Sol LeWitt and Joan Mitchell, she brings her own voice. “Every dealer’s point of view has the potential to add to the conversation,” she says. “I bring a different background than anyone else – for better or worse! And it’s about presentation. I’m in a townhouse with 14 ft ceilings and mahogany panelling. I look out the window and I see cherry blossoms.”

Whether showing giants like Calder or less well-known artists like Melotti, Mathes says, she considers both intellectual and emotional criteria. “I want to be challenged and excited,” she says. “If I am, then hopefully I can make you feel it, too.”

Jean Dubuffet, La gorgerette froncée (The Puckered Collar), 1959 “This belongs to Dubuffet’s Éléments Botaniques series of 1959. It draws on the flattened, frontal figures in Dubuffet’s Texturologies and combines organic materials with oil paint to form an elegant grotesque that recalls the vegetable-human hybrids of 16th-century Italian mannerist Giuseppe Arcimboldo.”


Manuel Espinosa, Untitled, 1968 “Espinosa was one of the leading figures of Concrete art in South America and built upon the development of international geometric abstraction in the years following the Second World War. This is an excellent example of how he created dynamic perceptual effects by layering geometric form and line to suggest movement and projection in space.”


Fausto Melotti, Senza titolo, 1974 “Melotti’s Senza titolo is a synthesis of the artist’s work in metal sculpture, painting, plaster and ceramics. Blending abstraction and figuration, with suggestions of simplified standing figures, this work includes attenuated brass forms that tie it directly to Melotti’s sculptures of the period.”


Giulio Paolini, Mimesi, 1975 “In Mimesi, Paolini’s plaster casts of the head of the Medici Venus in the Uffizi Gallery, Florence – an often-copied Hellenistic marble sculpture of the Greek goddess Aphrodite – face one another. This doubling acknowledges the lost Greek original, known only through its Roman copies, and the tradition of artistic appropriation.”


Browse the full range of artworks available from Barbara Mathes Gallery at sothebys.com/gallerynetwork 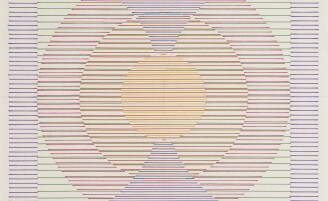 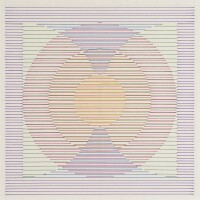 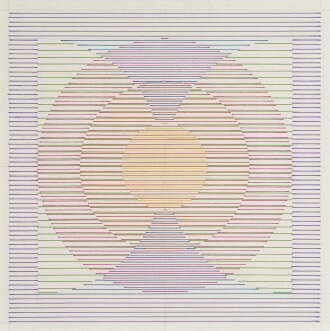