By Harry Edmonds
Upon first glimpse of Gerda Wegener’s Les femmes fatales, being offered in our sale of 19th Century European Paintings on July 9, you might not be able to name the artist but you might have heard of the woman on the right: Lili Elbe, formally identified as Einar Wegener, the first husband of Gerda.

T oday, Lili Elbe is recognised as the first pioneering recipient of gender reassignment surgery and was the recent subject of Tom Hooper’s 2015 film The Danish Girl starring Eddie Redmanye and Alicia Vikander.

Gerda Wegener first met her husband Einar Wegener at art school and they married in 1904. A woman ahead of her time, Gerda was an early representative of Denmark’s Art Deco movement. Inspired by developments in fashion in the early twentieth century, she initially worked as an illustrator for Vogue, La Vie Parisienne and other magazines. Around 1908, Gerda Wegener received a call from her friend and model Anna Larssen that she was unable to attend Gerda’s flat to pose for a painting that she was working on. Larssen suggested that Gerda ask her husband Einar to stand in for her in women’s clothing. Einar is said to have remarked “I cannot deny, strange as it may sound, that I enjoyed myself in this disguise.” And so Lili Elbe was born. Einar began to pose for Gerda on an ongoing basis, and after a few years, he began to dress as a woman regularly outside of being his wife’s model. It was actually Anna Larssen who came up with the name Lili when one day she arrived at Gerda’s studio and saw Einar posing for her.

And so began Einar Wegener’s double life. While Lili Elbe felt relief at being able to live out her true identity whilst at work posing for Gerda, the couple’s life was not without friction. When news broke out that Gerda Wegener’s husband was the model for many of her paintings, this proved too scandalous for conservative Copenhagen to embrace. In 1912, the couple left for the more accepting city of Paris and it was here that Gerda introduced Lili as her husband Einar’s sister, attending social events at which Lili would flirt with unsuspecting men. By February 1930 Einar wrote of his manhood: “I am finished” and that “Lili has known this for a long time; she rebels more vigorously every day.”

That month, Einar travelled to Berlin to meet physician and sexologist Magnus Hirschfeld who would eventually oversee the first of several gender reassignment operations that Einar went through. Whilst this has been the subject of some debate, it is widely believed that Einar was the first known recipient of such a procedure having four, possibly five, operations over a period of two years. Einar officially changed his name and gender with a new passport issued in October 1930. Since legally she could no longer be married to Gerda, the King of Denmark granted a special decree that voided the marriage with a divorce becoming official on October 6, 1930. The couple parted on friendly terms although by this point they were very much leading separate lives. Tragically, Lili died from paralysis of the heart due to organ rejection roughly three months after undertaking her fifth and final sex-change operation in June 1931.

Les Femmes Fatales is in many ways a glorious tribute to Lili Elbe’s life. Painted just two years after she died, the girl on the right has an uncanny resemblance to Lili based on previous portraits of her and this scene with its post-cubist and classical art deco mirrors the glamorous and hedonistic Parisian high society of the 1920s that Lili and Gerda had enjoyed together. Whether Gerda had started to paint this work while Lili was still alive, or based it on a previous sketch, we might never know. Despite its melancholic title, the work affirms Gerda Wegener’s admiration for the powerful female subjects that dominated much of her life. 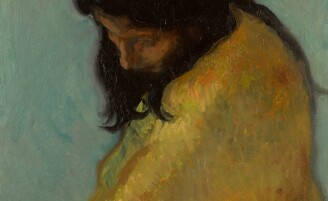