The Celebrated Collection of a Grande Dame

T he Arts of the Islamic World auction on 26 April features a number of exquisite Ottoman textiles from the celebrated collection of Argine Benaki Salvago. Described in Michael Haag’s book Alexandra, City of Memory as “one of Europe’s most beautiful women, the toast of Paris in her youth”, she was the grande dame of Alexandrian society in the 1930s.

Thanks to its position as the main trading port in the southern Mediterranean, Alexandria at the turn of the century was a cosmopolitan hub: a centre for art, commerce and creativity, evoked in the writings of E.M. Forster, Lawrence Durrell and Constantine Cavafy. The expansion of commercial traffic through the ancient port in the late Ottoman period offered an opportunity for entrepreneurial Greek families in the city, such as the Benakis, Choremis and Salvagos, to thrive economically through the development of family-run trading houses.

Argine’s parents, Emmanuel Benaki and Virginia Choremi, were both leading cotton producers, whose marriage sealed their business alliance, transforming them into the primary exporters of high-quality Egyptian cotton. Her husband, Michael Salvago, also a cotton baron, came from a family whose many notable achievements included the setting up of the National Bank of Egypt in 1898. Against this backdrop of private wealth, urbane cosmopolitanism and international sophistication, it is no surprise that prestigious collections of art were formed at this time.

In 1927, Argine’s brother Antony left Alexandria for Athens, where four years later the lion’s share of his collection, as well as the family’s home in Athens, was donated to the Greek state with the foundation of the Benaki Museum. The legacy of this great collecting dynasty was therefore preserved in a public institution to be enjoyed and appreciated by the general public. Argine also went on to donate her extensive collection of Persian antique jewellery, which can be viewed today in the Benaki Museum of Islamic Art.

The group of textiles offered in this sale is evocative of the richness and diversity of luxury textile production at the height of the Ottoman Empire. Created in government-controlled workshops in the late 16th and 17th centuries, silk products were amongst the empire’s greatest manufacturing achievements and played a key role in Ottoman society as indicators of rank and status. Initially resereved for the courtly class, the slow decline of empire meant that luxury textiles became available on the open market in the late 19th and early 20th centuries, with opportunities for collectors.

Contemporary photographs of the sumptuous interiors of the Salvago villa in Alexandria show how these textiles formed part of a grand décor, framed and hung on the walls like pictures. Today, it is extremely rare to find Ottoman courtly textiles still in private hands outside of Istanbul and the present examples stand out for their rarity, variety and impeccable provenance. Hidden from view for decades, their arrival on the market offers an exceptional opportunity for institutions and collectors alike to acquire major works of museum-quality importance.

The Arts of the Islamic World auction is in London on 26 April. 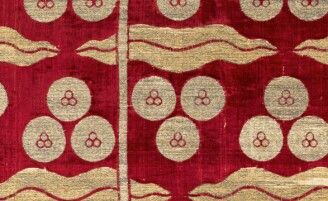