Zao Wou-Ki was an international master of abstractionism. Not only have his works been exhibited in countless important exhibitions in the last half-century, they have been inducted into over 120 public collections around the world. Publications show that his works have found an important home in American institutions, where a great number of important Zao paintings now reside. The majority of these works come from Zao’s ‘Oracle Bone Period’. Of these, the most prominent was Abstraction, formerly in the collection of the Art Institute of Chicago. Abstraction was sold by Sotheby’s Beijing in 2013 for RMB 89,680,000 (approximately HKD 113,000,000), creating a new auction record for Zao at the time. In 1955, the artist was invited to participate at the Third São Paulo Biennial, as well as the Carnegie International at the Carnegie Institute of Pittsburgh in USA, where Foule noire (1954) (Black Crowd) received an Honourable Mention. The painting was later donated to the Carnegie Museum of Art – founded in 1895, it was the first museum in the United States which focused on contemporary art. Today it owns over 30,000 works of art and is considered one of the most active top-level art institutions. To many and most importantly to Zao himself as an Asian artist, the acquisition of his works by important American public institutions was seen as a highly significant recognition for his accomplishment and position in the post-war Western art world. This spring, Sotheby’s Hong Kong is honoured to be offering Sans titre (Lot 1032), a Zao masterpiece from the collection of the prodigious Carnegie Museum of Art, a truly rare and wondrous opportunity to acquire such a treasure.

The 1950s were a golden age in the development of abstract painting. As one of the leading Asian post-war artists, Zao Wou-Ki expanded and deepened this new international art language with a deeper cultural spirit. He did so by incorporating oracle bone script, which began in 1954 when the artist was living in Paris. In 1957, the artist crossed the ocean to New York, where he was inspired by the wave of abstract expressionism sweeping across the country.

American abstractionism was bold and unrestrained, and its spirit became the impetus for the artist’s “Hurricane Period” (1959-1972). In 1957 as Zao created Sans titre, he has long mastered the oracle bone abstract creations. Using the typical colours such as blacks, whites, reds and blues, he unites them in a seemingly boundless space. What draws our attention in this piece, however, is the flash of golden yellow, a rare choice of colour in Zao’s oracle bone pieces. Intertwining throughout the canvas against silver-white tones, the gold and white add a distinctive touch of light, while creating a sharp contrast and tension with the shades of blue and red at the bottom of the canvas. The three shades distinguish while intricately complimenting one another. Sans titre may be more compact in size, Zao has marvellously created an atmosphere as brilliant and intense as that of the larger-scale paintings.

Oracle bone script comes from the East, a predecessor to the written word. From the perspective of the Eastern viewer, the painting evokes an emotion and connotation of familiarity. However, from the Western perspective, the oracle bone script becomes an unknown and abstract symbol, recalling a peculiar yet mysterious aura. Through Zao’s oracle bone paintings, viewers and academics begin to experience the modern interpretation of Eastern painting. In French artist Alfred Manessier’s words, ‘although what appears on the surface is different, this person is the same as we are, his inner world close to our own’. A good friend of Zao and the first-prize winner at the Second São Paulo Biennial, perhaps Manessier’s commentary from the beginning of the perfectly encapsulates the Western world’s evaluation and love for Zao Wou-Ki’s works. In addition, one can see the formerly quiet and simple oracle bone script begin to stir with dynamism, the symbols gradually integrating into the tableau, with the background of the painting lifting the entire scene into the air. The naming of this piece is a display of Zao Wou-Ki’s renunciation of having a subject. It was the artist’s pledge to break away from form, in welcome his next stylistic period. 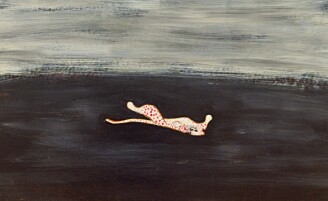