The Art of Golf

Much to the impish glee of his caddie, the Belfast born painter Sir John Lavery (1856-1941) admitted that he was 'not much of a golfer'. More interested in the visual drama than the actual game, Lavery would project all his ambition to portray the best swing for a drive. The present painting, The Golf Links, North Berwick, a highlight of our Scottish Art sale on 22 November, demonstrates Lavery's affiliation with the Glasgow Boys, a group of painters influenced by the French Impressionists and Post-Impressionists. Painted near the entrance of Westerdunes, Sir Patrick Ford's villa, The Golf Links, North Berwick depicts the 13th oldest golf club in the world, also known as North Berwick Golf Club.

It was in this exclusive setting, on the endless green fairways, between lashed sandstones and sea stack that politics, sports and art were to mingle. Alice, Lavery's stepdaughter, and the focal figure in this picture later recalled: ''we went every autumn to stay here with Sir Patrick Ford, who was a MP for Edinburgh at that time…my father meant to play golf and relax, but he never did, and he sent for his paints the week after he arrived''.

The spectacular scenery was painted by the artist on 9 different occasions between 1919 and 1921. However, only three works, of which the present work is one, allow the viewer to get a glimpse of the links and its players. The central characters include the former Prime Minister, H.H. Asquith, Patrick and Jesse Ford and Alice, the young vigorous woman teeing off. Lavery’s canvas recounts the extent to which golf was a means to women’s emancipation.  Alice embodies the young and liberated woman of the twenties. As such, Alice may even be wearing knickerbockers instead of the heavy tweed skirts. A forerunner in female emancipation, the North Berwick club had been one of the first to build a separate clubhouse for Ladies in 1888. Young women, like Alice, would be able to penetrate a male dominated area and enjoy the beneficial effects of sports on mind, body and soul.

Standing on the fringes of the Scottish coastline, Lavery's brush captures the dramatic essence of Scotland's landscape. Lavery shows us sunlight in all its variety, sometimes cheerful, often with a touch of grimness and always changing. What we are left with is a theatrical atmosphere. As observed by the author Kenneth McConkey, in Lavery's play, the multi-coloured green would serve as a stage, where the players are simply actors, performing under the sailing clouds of Scotland’s ever-changing sky. 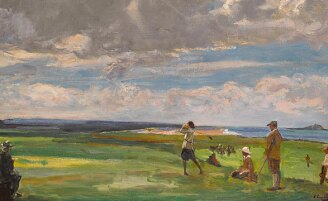