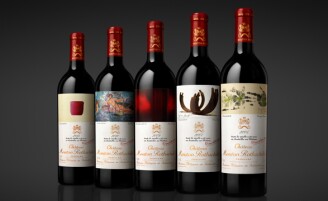 The proceeds from the sale of these beautifully crafted collectors’ cases will be donated to help fund restoration projects at the Palace of Versailles and efforts to rebuild Notre Dame Cathedral.

Successful bidders will also receive an invitation for them and a guest to attend a private visit and tasting at Château Mouton Rothschild as well as for an exclusive event, the Versailles Celebration Gala Dinner, at the Palace of Versailles on 21 September 2019, during which historic ex-cellar vintages of Château Mouton Rothschild will be served. The evening combines the world of art and the art of living symbolic of the two organisations, and presents connoisseurs with the one-time opportunity to be part of a unique artistic partnership, while supporting the future of the Palace of Versailles.

“Sotheby’s has had a wonderful relationship with Château Mouton Rothschild, presenting two very successful direct from the cellars sales. We are now excited to collaborate on this special offering of 75 Versailles Celebration Cases, which are being presented in a unique format, through auctions in Hong Kong, London and New York, culminating with the buyers enjoying a Celebration Gala Dinner at the Palace of Versailles”, said Jamie Ritchie, Worldwide Head of Sotheby’s Wine.

“An artistic bridge from one château to another, together we conceived this presentation case which celebrates the art and the art of living of one of the world’s finest wines, Château Mouton Rothschild, and the Palace of Versailles, a landmark of the world’s cultural heritage. It has been our wish to support the restoration of the Palace of Versailles by creating a limited-series collector’s case that brings together two internationally renowned symbols of art”, said Philippe Sereys de Rothschild, Chairman and CEO of Baron Philippe de Rothschild SA.

“For the past ten years, the greatest contemporary artists have engaged in a dialogue with the illustrious builders of Versailles. Before or after stopping off at Versailles some of them – Giuseppe Penone, Bernar Venet, Anish Kapoor, Jeff Koons, Lee Ufan – entered the unique collection created by Baron Philippe de Rothschild with the 1945 label and enhanced by his daughter, Baroness Philippine de Rothschild, around the labels of the most prestigious of their wines. This presentation case, reminiscent of puzzle boxes holding the most precious or fabulous secrets, bears witness to this shared history and to Baron Philippe de Rothschild SA as a patron of Versailles”, said Catherine Pégard, President of the Public Establishment of the Palace, Museum and National Estate of Versailles.

THE PALACE OF VERSAILLES

The Palace of Versailles, a UNESCO world heritage site since 1979, is at once a former royal residence, a museum dedicated to the history of France created by King Louis-Philippe in 1837 and a national monument that plays host to the French Parliament in congress. As well as its three historic residences – the Palace, the Grand Trianon and the Petit Trianon – the Versailles estate boasts an extensive French garden designed by André Le Nôtre with groves and fountains, the Trianon gardens and Marie-Antoinette’s Hamlet, a wooded park located beyond the Grand Canal and, since 2009, the Marly estate. Spanning more than 800 hectares (2,000 acres), the Versailles estate welcomes over 10 million French and foreign visitors a year who come to admire collections which comprise over 60,000 artworks. The former royal residence is like a textbook of French history from the 17th century to the present day, as well as a symbol of the French art of living, French taste and the skills of excellence. Firmly anchored in the present by the importance it places on artistic creation through the organisation of concerts, shows and contemporary art exhibitions and the promotion of arts and crafts, the reputation of the Palace of Versailles continues to shine all over the world.

HISTORY OF THE LABELS

In 1924, to salute his first vintage bottled entirely at the château, Baron Philippe de Rothschild (1902-1988), father of Baroness Philippine (1933-2014), asked the famous poster designer Jean Carlu to create the Mouton label. Ahead of its time, it remained an isolated initiative.

In 1945, this time to celebrate the return of peace, Baron Philippe decided to crown the label for the vintage with the "V" for Victory, drawn by the young painter Philippe Jullian. This exceptional circumstance marked the start of a tradition and, every year since 1946, a different artist has been invited to create an original artwork for the label.

Initially, Baron Philippe chose painters from amongst his friends, such as Jean Hugo, Léonor Fini and Jean Cocteau. In 1955, Georges Braque agreed to illustrate the vintage; he was followed by the greatest artists of our time, including Dali, César, Miró, Chagall, Picasso, Warhol, Soulages, Bacon, Balthus, Tàpies and Jeff Koons, forming a fascinating collection to which a new work is added each year.

Today, artists are chosen by Julien de Beaumarchais de Rothschild, in close collaboration with his brother, Philippe Sereys de Rothschild, and his sister, Camille Sereys de Rothschild. The commission respects their artistic freedom, though many of them have been attracted by themes such as the vine, the pleasure of drinking or the ram, the Mouton emblem. The artists receive no fee for their work but are given cases of Mouton Rothschild, including of course "their" vintage.

THE VINTAGES AND LABELS

The Italian sculptor comes from a family of farmers and is particularly attracted to the materials and colours of the vegetal world. In the vine grower’s ‘green fingers’, recalling a vine leaf, the artist reveals the connection between humans and nature, like an essential and universal handprint.

2005 was a very high-quality vintage marked by exceptionally dry weather from winter until harvest. Flowering took place quickly and evenly and the berries started to change colour in early August. The heat and sunshine that prevailed throughout the summer proved a good omen for a very fine vintage. Hot and dry weather in August encouraged the grapes to reach full maturity, heralding a magnificent crop, and picking took place in ideal conditions. The wine has a dark, deep colour with cherry highlights. The nose combines oak, toast and vanilla notes with bilberry and raspberry fruit, while freshness is apparent in the minty touches which enhance this panoply of aromas. A powerful yet silky attack gives way to densely textured, patrician tannins, leading into a very long and beautifully balanced finish that underlines the elegance of an exceptional wine.

Château Mouton Rothschild 2007, illustrated by Bernar Venet
The French sculptor and graphic artist Bernar Venet uses his monumental, random, steel lines to occupy space. His work evokes chalices that are both rooted in the earth and open, like vinestocks, to the precious gifts that come from above.

Unusual weather patterns prevailed in 2007. Warm spring weather which caused early flowering was followed by a cool summer and an exceptional amount of sunshine in September. Conditions like these in the first stages of a wine’s life meant that the vintage required constant care. Intensely coloured with a violet tint, the wine reveals a rich array of aromas in which wild blackberry combines with red and black fruit and liquorice. Peppery spice mingles with vanilla as the nose opens up, ushering in floral aromas reminiscent of lilac and peony as well as minty, mineral smoky notes. Substantial on the palate, with powerful but creamy tannins, Château Mouton Rothschild 2007 displays remarkable balance.

Château Mouton Rothschild 2009, illustrated by Anish Kapoor
The British sculptor, painter and visual artist of Indian origin Anish Kapoor gives viewers access to a poetic existence by eliciting in them a new way of seeing things, whether in the world around them or deep within themselves. The flamboyant gouache he created expresses the fertile thrust of plant life, the result of an intense encounter between matter and light.

Climatic conditions perfectly suited to the vegetation cycle and the maturing process naturally resulted in an exceptional vintage in 2009. The magical alchemy of a harsh winter, a stormy spring, an early summer and a fine late season yielded grapes bursting with sumptuous aromas and flavours. A deep, dark, almost black colour, the wine has a stylish and complex nose on which aromas of bilberry, blackcurrant and blond tobacco mingle with cedarwood and spice. The palate displays refinement and density with well-rounded, patrician tannins, revealing remarkable structure and balance right through to the long and opulent finish.

Château Mouton Rothschild 2010, illustrated by Jeff Koons
The American visual artist and painter Jeff Koons felicitously combines the Pop Art tradition with the kitsch aesthetic. He is also quite capable of revisiting Antiquity, producing here a new take on a famous fresco from Pompeii and endowing the Birth of Venus with a vessel which, without a doubt, conveys the most exquisite of nectars.

In a year that was both cool and dry, just enough rainfall came at just the right time, in June and September, to balance the summer sunshine. Some spells of very hot weather kept the grapes rather small, but they yielded rich and highly coloured juice with good acidity. The wine has that much-appreciated dark and intense colour, though here with a blueish tint. The nose offers lightly toasted vanilla notes with inviting fruit aromas, especially blackcurrant and black cherry. Powerful and well-rounded tannins reveal exceptional depth and roundness on the palate, while a fresh and mineral finish confirms the elegance and harmony of this vintage.

Château Mouton Rothschild 2013, illustrated by Lee Ufan.
The painter, visual artist and philosopher of Korean origin Lee Ufan works with natural materials and simple forms that allow the intensity of the essential to shine through. In the work he has created for Mouton 2013, the initially indecisive purple of the drawing gradually attains its full richness, just as a great wine is patiently brought to fulfilment in the secret of the vat house.

In 2013, the whims of nature imposed a cold and damp winter, followed by a cool and wet spring and a contrasting summer of intense sunshine and low rainfall. Such paradoxical conditions resulted in low yields and called for draconian selection of the grapes at harvest time. The wine is an intense, deep red with a crimson tint. Initially displaying black cherry, raspberry and blackberry aromas, the complex nose goes on with airing to reveal spicy and subtle roast coffee-bean notes. From a clean, fresh and rich attack, the palate expands on suggestions of vanilla and chocolate, underpinned by tannins of unrivalled refinement. The firm and well-rounded structure reveals a long finish of powerful aromatic intensity.

For a full list of the artists and labels please visit https://www.chateau-mouton-rothschild.com.

A Bordeaux First Growth, Château Mouton Rothschild comprises 84 hectares (207 acres) of vines at Pauillac in the Médoc, planted with the classic varieties of the region: Cabernet Sauvignon (80%), Merlot (16%), Cabernet Franc (3%) and Petit Verdot (1%).

The estate benefits from exceptionally favourable natural conditions, in the quality of the soil, the position of its vines and their exposure to the sun. Combining a respect for tradition with the latest technology, it receives meticulous attention from grape to bottle from highly skilled winemakers and vinegrowers responsible for each

parcel of the estate. The grapes are harvested by hand in small open crates, sorted on vibrating tables and vinified in oak vats with transparent staves, after which the wine is matured in new oak casks.