T he Contemporary Art Evening Auction (16 May | New York) is now on view in Sotheby's newly-expanded York Avenue galleries in New York – featuring 90,000+ square feet of new galleries across four reimagined floors of our headquarters – as part of our marquee exhibitions of Contemporary and Impressionist & Modern Art.

T he May auction is led by Mark Rothko’s Untitled, 1960, on offer on behalf of the San Francisco Museum of Modern Art (SFMOMA), sold to benefit the institution’s Acquisitions Fund (estimate $35/50 million). An important work completed at the apex of Rothko’s artistic powers, Untitled, 1960 is one of just 19 paintings completed by the artist in 1960. This year marks a critical juncture in the iconic Abstract Expressionist’s career, following his defining commission of the Seagram Murals (1958-59) and his representation of the United States in the XXIX Venice Biennale (1958) – organized by the Museum of Modern Art, New York, which would subsequently hold Rothko’s first and only major lifetime retrospective in 1961.

Untitled, 1960 is distinguished further by its connection to Peggy Guggenheim. A champion of Abstract Expressionism broadly and of Rothko, Peggy Guggenheim gave Rothko one of his first important solo shows in 1945, at her famed Art of This Century gallery. The following year, she loaned the artist’s Slow Swirl at the Edge of the Sea to SFMOMA’s exhibition of Rothko’s work titled An Environment for Faith, and subsequently donated the work to the institution. Slow Swirl at the Edge of the Sea remained in the museum’s collection until 1962, when SFMOMA made the direct request to Rothko to exchange the work for a more contemporary example of his oeuvre. The artist obliged, and the museum selected Untitled, 1960, which has remained in their collection to present. Slow Swirl at the Edge of the Sea now resides in the collection of The Museum of Modern Art, New York.

Mark Rothko’s Mirrors of the Soul

T he auction is highlighted by a selection of works on offer from the Richard E. Lang and Jane Lang Davis Collection – indisputably one of the most important private collections of 20th century art, spanning from Surrealism through Abstract Expressionism. Assembled in the 1970s and ‘80s, the Richard E. Lang and Jane Lang Davis Collection now belongs to the Friday Foundation, a private charitable organization committed to working with its cultural partners to ensure that the great works remaining in the collection will be enjoyed by the public, while also supporting key arts initiatives that were important to the Langs with proceeds from the sales.

The May offering is led by one of the most important paintings by Francis Bacon remaining in private hands: Study for a Head from 1952 (estimate $20–30 million). An outstanding example of Bacon’s most celebrated and recognizable iconography, Study for a Head powerfully captures the silent scream of his iconic Popes. In 1952, Bacon painted six small head-and-shoulders portrait paintings, which demonstrate the advancement of his suited businessmen as well as the Papal imagery that he began in the late 1940s. Other works from this series now reside at Tate Britain, London and the Yale Center for British Art, New Haven. Study for a Head is distinguished further as one of the first works by Bacon to enter a private American collection, having first been acquired by the collector, art critic and biographer of Jackson Pollock, Bernard H. Friedman in 1952 – predating Bacon’s first solo exhibition outside of England, which was held at Durlacher Brothers in New York in 1953.

S otheby’s will offer select works from the Gerald L. Lennard Foundation Collection across our Evening and Day Auctions of Contemporary Art this May, with proceeds from the sale benefiting the Foundation’s mission to transform lives through strategic initiatives that support the visual and performing arts, equitable education and healthcare, environmental sustainability and social justice.

Art as a Window to the Mind: The Collection of Gerald L. Lennard

Passionately assembled by successful commodities trader Gerard L. Lennard primarily in the mid-1970s through the 90s, the collection is led by a number of evocative works executed by artists working at the peak of their powers. Highlights include: Willem de Kooning’s Untitled X, a stunning example from the group of works created in 1975 that marked the artist’s transition from a period of radical experimentation to the lush abstracts which are among his most celebrated and sought after works today (pictured left, estimate $8–12 million); Francis Bacon’s Study for Portrait from 1981, the last of the artist’s famed portraits of his lover and muse George Dyer (estimate $12–18 million); the most comprehensive group of late works by Philip Guston ever to appear at auction, including Legs, Rug, Floor from 1976 (estimate $6–8 million) and Red Sky from 1978 (estimate $6–8 million); and signature portraits by Frank Auerbarch depicting his wife Julia Wolstenhome and his friend Catherine Lampert.

T he most important collection of Color Field paintings ever to appear at auction will highlight our Contemporary Art auctions this spring, emerging from the triumphant collection of Blema & H. Arnold Steinberg. Assembled across decades by the Canadian collectors and philanthropists from the mid-1960s through to 2014, the 100+ works offered this year together are estimated to achieve in excess of $40 million.

From Picasso to Motherwell: A Singular Vision of 20th Century Artistic Innovation

In addition to vibrant compositions by an array of Contemporary artists including Agnes Martin, Robert Motherwell, Helen Frankenthaler, Kenneth Noland and Adolph Gottlieb, the Steinberg collection is led by two transcendent paintings on paper executed by Mark Rothko in 1969, the final year of his life: Untitled (Red and Burgundy Over Blue), estimate $9–12 million) and Untitled (Red on Red) (estimate $7–10 million). Both are dazzling embodiments of the artist’s legendary Color Field compositions, which are distinguished as rare, exquisitely vibrant examples from a period of the artist’s fabled career that was largely characterized by a predominantly somber palette. The paintings exemplify Rothko’s work in a medium that bore an increasingly profound significance in the twilight years of his oeuvre when, tirelessly seeking to broaden the horizons of his practice, he focused his energies upon exploring the absolute limits of painting of paper.

L ee Krasner's The Eye is the First Circle is the last major large-scale work by the artist remaining in private hands, appearing at auction this May after more than 20 years in the same distinguished private collection (estimate $10–15 million). Executed in 1960, The Eye is the First Circle stands today not only as a defining work of Krasner’s career at the peak of her artistic powers, but also a masterpiece of the Abstract Expressionist era broadly.

Reeling from her husband and fellow artist Jackson Pollock’s fatal car crash in 1956, followed by her mother’s passing in 1959 and the cancellation of a planned exhibition at French & Co. that same year, Krasner plunged into a new series of paintings, harnessing her emotional turmoil as a catalyst for her first monumental Umber paintings. Many nights, the artist found herself unable to sleep and painted instead. Without daylight to illuminate her canvas as she worked, Krasner began to eliminate color from her palette, instead working within the nuanced range of amber, cream, and umber tones used in the present work. She consequently referred to the resulting Umber paintings as the Night Journeys. The title of the present work, The Eye is the First Circle, came to Krasner as she was struck by the half-lidded eyes which seemed to peer out from the dense thicket of pigment.

M easuring a staggering 96 by 120 inches, Robert Motherwell’s monumental Elegy to the Spanish Republic No. 134 from 1974 is a definitive example from the artist’s revered Elegies series – his most extensive and acclaimed body of work (estimate of $9–12 million). Motherwell was a 21-year-old student when the horrors of the Spanish Civil War commenced in 1936, which had a profound impact on the young artist. As the recurrent motif of his Elegies, the symbolism of these ovular slabs has been debated extensively.

I mportant works by nearly 40 celebrated artists with strong ties to the HamMuseum at UCLA have been donated for auction this May in Sotheby’s Evening and Day Auctions of Contemporary Art. Under the visionary direction of Ann Philbin, the Los Angeles institution has emerged over the past two decades as one of the most vibrant and influential museums in America. This historic sale will support the creation of a new Artist Fund, which will directly support the museum’s pioneering exhibition program and work with emerging artists. The fund is part of the museum’s $180 million capital campaign, which also includes a major transformation of the Hammer’s facility and an expansion of its endowment. 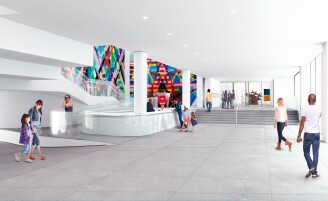 A highlight of the group is Mark Bradford’s Scratch Pink from 2018, which is estimated to sell for $2/3 million in the Contemporary Art Evening Auction on 16 May. Renowned for his richly textured canvases built up of layers of collaged paper, Bradford’s expressive abstraction embodies the urban experience as-lived. Invoking visions of cartographic grids or aerial topography, Scratch Pink is an exceptionally vibrant example of the artist’s mixed media paintings, which have most recently been celebrated in his solo shows at Hauser & Wirth in Hong Kong and Los Angeles. Widely regarded as amongst the most influential artists of his generation, Bradford received his first solo museum exhibition in his hometown of Los Angeles, Mark Bradford: Scorched Earth, at the Hammer Museum in 2015.

S otheby’s ongoing sales of works assembled by the late visionary collector, patron and Museum of Modern Art, New York trustee David Teiger continue this May. A selection of five works by Contemporary titans long championed by Teiger including Mark Grotjahn, Dana Schutz, John Currin and more will highlight the Evening Auction, with proceeds benefiting Teiger Foundation – soon to be one of the world’s largest and most significant contemporary art foundations.

The offering is led by Jeff Koons’s monumental Elephant (Violet), a quintessential example from his widely acclaimed Celebration series (pictured right, estimate $2–3 million). Executed in 1995–2000 and acquired by Teiger in 2004, the work will be on public view for the first time as part of Sotheby’s upcoming exhibition. Part of a series of five painstakingly-rendered versions, Elephant (Violet) exemplifies Koons's levels of formal perfection achieved in the elaborate construction and demanding materials of his Celebration sculptures. 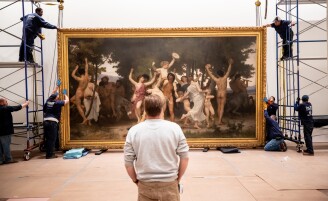 Breaking Ground
How to Install a 12-Foot Steel Elephant, a 20-Foot Painting and More Behind-the-Scenes Magic from Sotheby’s New Galleries

The group is highlighted further by Jenny Saville’s larger than life Reflective Flesh from 2002-3, an important and generative painting previously exhibited in the artist’s 2003 solo exhibition Migrants at Gagosian Gallery in New York (estimate $2–3 million). Standing ten feet tall and eight feet wide, the monumental work simultaneously expresses an incredible intimacy in both subject matter and sentiment. Saville frequently inserted herself into her compositions, using her own physique to explore the intimacies and intricacies of the female body. Working from photographs taken of herself in awkward and compromising positions, Saville lays her own nakedness bare, resulting in a bold, defiant, provocative and intellectual response to one of the most venerable genres of art history – the female nude.