I was 24 when I discovered the still world of paintings and this encounter turned my existence into an adventure.

F ew could lay claim to a life story as compelling as that of Daniel Cordier. His experiences as a young man bring together such seemingly disparate worlds as the French Resistance, the secret service and fine art. Sotheby’s Paris is proud to present the Daniel Cordier, Collection Privée sale from 28 April to 5 May.

The auction follows the “white-glove” sale of works from Cordier’s gallery, Alias Daniel Cordier, at Sotheby’s Paris in September 2018, which saw participation from 400 bidders before every single lot found a new home. This time, the auction will dive into the personal world of the great hero – presenting the art he chose to keep at his apartment throughout his life, and arguably, the works that were most important to him. From Nevelson to Duchamp, to Ossorio, Dado and Gabritchevsky, Daniel Cordier loved to live surrounded by all of “his artists”. With every lot executed between 1955 and 1965, the sale provides an unparalleled snapshot into the post-war decade – an opportunity for collectors to rediscover the artists that Cordier dedicated himself to.

Among the first French recruits to embark for London after the fall of Paris, Cordier rejected the French armistice arrangement as a disgraceful betrayal. He trained as a soldier, intending to fight in the French infantry, but grew impatient with the long wait to be parachuted into occupied France. Instead he chose to join the secret service, return to France sooner and hopefully make a difference. In 1943 he was sent under cover to Lyon, his mission to assist a man who would become a legend of the French Résistance, Jean Moulin. Moulin had been tasked with unifying the disparate Résistance groups in France.

For a year, Cordier served as Moulin’s secretary, playing a pivotal role in the creation of the unified National Council of the Résistance. But Moulin needed a convincing cover in order to continue to travel throughout France. Few people knew of his pre-war interest in art: he aspired to be an artist as a young man, had drawn political cartoons and had a remarkable collection of works that included Picasso, Renoir, Delacroix, Van Gogh and Soutine. So he decided to register as a painter and art dealer with the Vichy authority, going so far as to launch a gallery in the South of France in February 1943. It opened with a show called "Maîtres modernes", and showed works by Bonnard, Degas, Dufy, De Chirico, Kisling, Matisse, Rouault, Severini and Utrillo.
Cordier became Moulin’s gallery assistant, and his education in art — which was vital for his own cover to stand up to scrutiny if he was ever questioned — had begun.
After the liberation of France in 1944, Daniel Cordier decided to continue his career in the art world and take on Moulin’s role for real. In 1946, struck by an Henri Michaux ink on display in a library window on boulevard Saint-Germain, he made the move from enthusiast to collector. His second acquisition quickly followed: an abstract painting by Jean Dewasne. This was the beginning of a passion for collecting art that lasted a lifetime.

Ten years later, in 1956, he opened his own gallery on rue Duras, next door to the Galerie Charpentier (which, incidentally, is today the headquarters of Sotheby’s France). This was quickly followed with further openings: a space in Frankfurt in 1958, then another in New York in 1960 in partnership with art dealer Michael Warren and diplomat Arne Ekström. For the next eight years, Cordier was regarded as the go-to gallerist for the prominent artists of his time, particularly Jean Dubuffet, Henri Michaux, Hans Bellmer, Dado, Matta, Bernard Réquichot, Jean Dewasne and Julius Bissier.

Daniel Cordier was one of the great post-war art world figures, strong in his dedication to the belief that “a work of art is not to ease but to awaken and hassle the mind”. He never ceased to hunt for spirited artists, and he became the first to show the work of Enrico Baj, Manolo Millares, Robert Rauschenberg and Louise Nevelson in Paris.

When he closed his gallery in 1964, he turned his focus back to collecting and historical writing, releasing a biography of his onetime mentor, Jean Moulin in the 1970s, and an award-winning, best-selling novel, Alias Caracalla, based on his activities as a member of the Résistance during World War Two.

Cordier was also behind one of the largest donations of art ever made to France. As a founding member of the Centre Pompidou, his successive donations have enriched the Musée National d’art Moderne with more than a thousand objects and contemporary artworks. 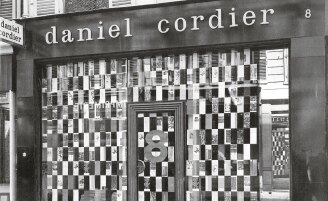