Rimbaud's Poignant Letter to his Sister Sells for €405,000

A n extraordinary three-page illustrated letter from the celebrated poet Arthur Rimbaud to his sister Isabelle sold for €405,000 in the Bibliothèque R. & B. L. VII auction in Paris on 9 October, achieving more than four times the pre-sale estimate of €80,000-100,000. The auction made a total of €3.5 million, demonstrating the exceptional calibre of books and manuscripts in the collection, and Rimbaud was certainly the star of the show in this sale. This letter, along with five others sent from Rimbaud to various family members, made a combined total of €890,000.

This letter is perhaps the most important document in existence that details the decisions he faced, and the situation he was forced to contemplate in his final weeks and months. Much was written on Rimbaud’s illness in the years after his death, but it is only here, in his own hand, that he truly reveals the emotional burden of his deteriorating health. Signed and dated “Marseille 10th July 1891”, the letter has particular poignancy, as in it, Rimbaud has included three drawings; of his wooden leg, his two crutches and a model of his artificial leg.

Prior to the writing of this letter, Arthur Rimbaud was hugely influential to a roll call of artists, musicians and fellow writers, and his major influence on the shape of the creative arts far outlived his short 37 years on earth. His 1873 work A Season in Hell, was said have influenced the Surrealists, many of whom discovered his works in the years before the movement was established. It was, in fact, the only title published himself, and is considered the forerunner to modernist literature. For his contemporaries, military service was an inevitable fate for a young man in rude health, however, Rimbaud ran away to Paris with no money (and no ticket) as a teenager and was quickly arrested for vagrancy.

He was eventually released from prison into the care of his teacher and mentor, Georges Izambard, who he had known as a young boy, and was responsible for introducing Rimbaud to the works of great poets; giving him a copy of Victor Hugo's Les Misérables, much to the annoyance of the young Rimbaud’s mother. The book, and the relationship with Izambard, were hugely influential on the choices Rimbaud made, and awakened a desire to write and to explore the world.

During the late 1870s, Rimbaud embarked on a tempestuous relationship with the poet Verlaine, and continued to both shock and delight Parisian audiences with his radical poetry. The couple’s lifestyle was closely scrutinised and conducted against the backdrop of alcohol and drug abuse. Despite this, they moved in upper class, intellectual circles and Rimbaud remained a darling of the literary avant garde. His desire to travel gathered strength, and he eventually joined the military, enlisting in the Dutch Colonial Army so that he could travel to the Dutch East Indies (now present day Indonesia). This passion continued throughout his life, and travel played a significant role until ill health prevented further adventures.

The 10 July letter offered on 9 October gives a glimpse in to the mind of a man at his wit’s end: unwell, afraid and alone, Rimbaud’s desperation is palpable in these paragraphs. Here is a man who has accepted his fate, and describes in great, poetic detail, the turmoil of his final days to his closest of allies, his beloved sister Isabelle. 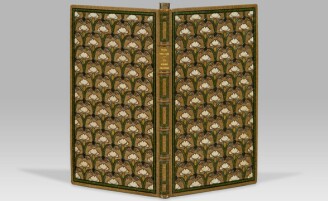