By Sotheby's
Sotheby’s is to display a collection of rarely-seen film posters from the 1930s, 40s and 50s go on show in Shoreditch, alongside new artworks inspired by the iconic cartoon

The original posters include four from the 1930s, and three from the 1940s and 1950s, giving fans a nostalgic look back at the life and legacy of Mickey Mouse.

Spanning the first half of the 20th century and dating as far back as Mickey’s eighth birthday (1936), the original posters have rarely been exhibited in public and are among the few examples that have survived. Following the public exhibition, the works will be up for sale in an exclusive online auction running from 16-26 November.

The free exhibition is open 16th – 18th November at The Black & White Building, London (EC2A 3AY). Sign up here for tickets or contact Ash Keith for a private appointment to view. 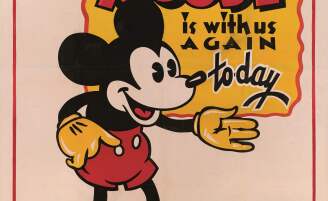