"Mr Long’s simplicity is the seductive simplicity of genius, fascinating, stimulating, inspiring, but oh so deceptive! ... As I glance through its entrancing picture pages, I sigh with regret that Tung Yuan and Chu Jan, Kuo Hsi and Fan Kuan, Ma Yuan and Hsia Kuei are not with us today, to profit from the professional hints and pointers Mr Long could so easily and so usefully give them."
–Sir Percival David, 21 July 1942, Shanghai

Long was born in 1982 in the Huaiyin district of Jiangsu Province. Spanning the entire course of the development of photography in China, his photographic career began in 1904 at the early age of thirteen and did not cease until his passing in 1995 at the age of 104. Long devoted his life to the promotion of photography, infusing within it the spirit of the East. He developed novel techniques and created a unique photographic language. He participated in countless exhibitions and received numerous international awards. Sotheby’s is honoured to have assembled 24 works by the artist, whose styles range from documentary of human subjects and nudes to composite pictures and photograms in the auction Moments of Flash, on 3 April at Sotheby's Hong Kong. This is the first complete retrospective held on behalf of this great master, and many of the pieces bear the artist’s personal seal, as well as inscriptions invoking other important historical figures.

Photography: A Path from Technology to Advertising to Photojournalism to Art

In 1904, while studying at the Shanghai Nanyang Middle School, Long first encountered photography and dark room techniques. In 1912, Long joined the advertising department of Shanghai’s Shen Bao newspaper, and soon after, in 1919, he founded the Chin-San Advertising Agency, which would become a pioneer in the Chinese advertising industry, operating for over 30 years.

In 1928, Huang Bohui, publisher of the Shanghai newspaper Eastern Times, imported a colour printer and invited Long to become the first photojournalist in Chinese history.ii The arc of Long’s early career is clearly in synchrony with the development of photographic technique. The works on offer at this sale include many landscape pieces, representing Long’s documentary technique, includingThe Raft iii from Zhejiang Province’s Sheng County and Music of the Fall iv  from Tiantai Fangguang Temple in Zhejiang province. These pieces showcase the magnificent beauty of the Chinese landscape at the beginning of the 20th century, images that stand in great contrast with the modern scenery standing in the same places today.

At the beginning of the 1920s, Long was beginning to release works of art photography, and his nature photograph, Lotus and Willow, appeared for the first time in the Shibao Illustrated newspaper. Three other pieces were on exhibit for the Shanghai Photographic Society’s Chinese Cultural Photographic Exhibition. In 1928, the same year Long had moved to the Shibao paper, he established the Chinese Photographic Society in Shanghai, which was one of the earliest photographic associations in China. From that time on, Long became completely devoted to his identity as a photographic artist. Meditation, which the artist captured in 1928, is regarded as the first nude photograph in Chinese photographic history. Beauty in Veil, captured in 1932, was considered a strikingly bold and avant-garde work. Throughout the decade, he hosted the Huangshan Painting, Calligraphy and Photography Exhibition along with Zhang Daqian and other artistic heavyweights. In doing so, he elevated the emerging art of photography to the same status as Chinese painting and calligraphy.

Rising to the International Stage: Promoting Eastern Aesthetics through Photography

While Long was promoting photography in China, never did he neglect also to promote Chinese aesthetics on the global stage. He once said, “Photography is an international language, and I’ve decided to use this most powerful of international languages to introduce and present to the entire world China’s natural beauty, its riches of culture, its virtuous ethics.” As early as the 1930s and 1940s, Long had become a member of numerous international photographic associations, including the Photographic Society of America and the UK’s Royal Photographic Society. According to the records of academic scholar Zhu Xiuxia, between 1931 and 1948, Long received over 80 awards from international salons.v In 1960, he, accompanied by Man Ray, visited the illustrious artist Zao Wou-ki in Paris,vi and among the personal items left by Long after his death were portraits and negatives of artists like Duchamp, Picasso, Ansel Adams, Alfred Stieglitz, and other important artists and photographers, clearly illustrating relationships between Long and his fellow artists. In the 1980s, he was hailed as an artistic master by the Fédération Internationale de l’Art Photographique (FIAP) and was also named “One of the World’s Top Ten Photographers” by the Photographic Society of America. In 1995, at the age of 104, Long, along with Wu Yinxian, Chen Fuli, and other first generation Chinese photographic masters, gathered together in Hong Kong to found the Society of World Ethnic Chinese Photographers. Long’s tireless promotion of the magnificence of Chinese art, as well as his ceaseless, unfaltering passion, is worthy of the utmost admiration.

In Eastern aesthetics, the presence of a sense of spirituality is considered the highest realm in painting, a height unattainable by early photographic efforts. Long subverted this through his steadfast insistence on the ‘unity of photography and painting,’ breaking free from the boundaries dictated by the respective mediums of film and painting, and emphasising the commonalties between the two. He advocated for using the six principles of Chinese painting developed by the legendary Southern Dynasties portrait painter Xie He and even created his own inventions of “composite pictures” and “photograms.” These types of photographic images combine the theoretical and technical advantages of Eastern and Western art, using cutting-edge Western technology to elevate the realism of Chinese art. This allows the artist to become liberated in the arena of technique, freeing him to single-mindedly pursue the yijing, or artistic concept, as well as the poetry and spiritual freedom of a work of art. 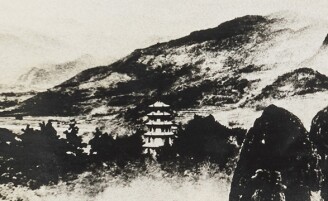