Paul Delvaux and the Rise of Modernity

T he advent of the twentieth century was accompanied by anxieties of change and modernization; as technology progressed, politics, economies and societies evolved in a manner that drew people to urban centers while the number of skilled laborers decreased. To many, the consequential commodity culture and the prevalence of mass population centers were viewed as threats upon the individual. During the first half of the twentieth century, many artists sought either to reaffirm their individuality in their works or to critique the technological age. For surrealists like Paul Delvaux, this critique and reexamination of the “known” or “normative” was accomplished by getting past the repressive function of the mind and gaining access to an unconscious realm – the realm of imagination, poetry, madness and desire – to reveal a double reality: a fantastic, unconscious reality that existed but was overlooked by a society beholden to utility. Ultimately, Delvaux aimed to bring the two realms of the conscious and the unconscious together and remake a reality exclusively subsumed to rationality and utility into one (a sur-reality).

"I know that despite the pleasure I have in painting them, railways and stations are somewhat limiting subjects, but wrenching them out of normality has the opposite effect and pushes the subject towards the universal"

Such is why locomotives make repeated appearances throughout Delvaux’s oeuvre. Trains and trams were an integral part of his world, and many of the artist’s presentations of them are careening through highly urban settings populated by enigmatic women. Delvaux’s Le Veilleur III ou Horizons, Le Tramway, Porte Rouge, Ephèse and Le Tramway de notre enfance (Mémoires), featured in Sotheby’s Impressionist & Modern Art Evening and Day Sales, are three such monumental works in which the artist anachronistically features classical figures within the modern landscape.

As the artist explained, “I loved trains and my nostalgia for them has stayed with me, a memory from youth. I don’t attach any special significance to that, nothing to do with departure, but more an expression of a feeling. I paint the trains of my childhood and through them that childhood itself. The pictures of stations and trains do not represent reality. There remains the strange, a spectacle perhaps? I know that despite the pleasure I have in painting them, railways and stations are somewhat limiting subjects, but wrenching them out of normality has the opposite effect and pushes the subject towards the universal” (quoted in Paul Delvaux 1897-1994 (exhibition catalogue), Musées Royaux des Beaux-Arts du Belgique, Brussels, 1997, p. 27).

The importance of the imagined architectural setting was paramount for Delvaux. While in Le Veilleur III ou Horizons he depicts an entirely modern exterior dominated by contemporary buildings and trains, he was certainly aware of the ancient connection made between the column and the human form. Of particular interest for the artist was the classical portrayal of a draped female body, and David Scott has pointed out how Delvaux's early mastery of architectural drawing played an all-important role in the development of his imagery: "Delvaux uses perspective to establish a tension between nude and background, in which these elements combine, becoming charged with erotic energy. In transmitting its electricity along the lines of perspective with which it is juxtaposed, the nude body eroticizes its environment; the viewer of a work, while absorbed by the desirable objects in the foreground of the picture, is nevertheless enticed by the perspectival lines to look through or beyond them" (David Scott, Paul Delvaux: Surrealizing the Nude, London, 1992, p. 103).

In Le Tramway, porte rouge, Ephèse Delvaux explores his fascination with the conventions of perspective in western painting dating back to the Renaissance. The diagonal lines of perspective developed by the Quattrocento masters are here somewhat comically replaced with the lines of the train tracks and the pattern of the paved road. Furthermore, Delvaux plays with the traditional notion of perspective by exaggerating the difference in size between the dominant figure in the foreground and the almost minute, semi-nude woman on the left of the composition.

The lack of central figure or protagonist in Le Tramway de notre enfance (Mémoires) deviates from Delvaux’s more typical composition, and here the gaze is absorbed by the audience, who observes the scene from the other side of the tracks. Delvaux calls upon the audience in the title to recall a collectively shared narrative. The act of remembering and the feeling of nostalgia then shifts from the deeply personal to the universal. As observers from across the tracks to this mysterious train’s arrival or departure, we become complicit in the dream and project our own memories onto the scene, as we witness the voyage of the tram’s passengers between dream and reality.

Although Delvaux's paintings are renowned for their other-worldly imagery, the artist claimed not to be a proponent of the writings of Sigmund Freud and did not invest his compositions with psychoanalytic references favored by, among others, Dalí and Miró. Delvaux's approach to painting was more subtle in its representation of the uncanny—without being overtly grotesque or offensive with his imagery he would interrupt the peacefulness and banality of a given scene with instances of the bizarre. Gisèle Ollinger-Zinque writes of the artist in the context of the Surrealists:

There is no need whatsoever of psychological analyses or psychoanalytical interpretations... to understand the world of Delvaux. It is made of simplicity and reality. It is the blossoming and affirmation of poetry by means of the contrasts that exist between the great monumental figures and the anachronistic settings in which they move. In this the artist agrees with the thinking of Breton who declared that the more the relationships were distant and exact, the more powerful the image would be. More than Delvaux the painter, it was Delvaux the surrealist poet whom Eluard and Breton hailed because his pictorial universe exists out of time, eludes fashion and defies any attempt at classification (quoted in Paul Delvaux 1897-1994 (exhibition catalogue), ibid., p. 27). 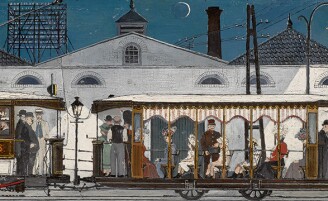